Spread the love
thanks for the views we appreciate : 951

President Muhammadu Buhari on Wednesday submitted the list of his ministerial nominees to the Senate.

The list of 43 nominees was read by senate president Ahmad Lawan on the floor of the Senate immediately after a closed session held by the lawmakers.

Diverse reactions have, however, trailed the list.
Here are some reactions of Nigerians on social media:

I pray and hope that after senate clear them , they help Mr. President in stabilizing the nation to put an end to all this killing here and there #MinisterialList

Not all these old wines#MinisterialList

I’m happy BRF made the list….I’m sorry no apologies…very unapologetic…u may not like it…it’s ok. #MinisterialList

Oh Jesus! thank u Father,@MBuhari obviously listened to somebody, whoever this vessel is may God continue to use you as a voice of reasoning for this govt… 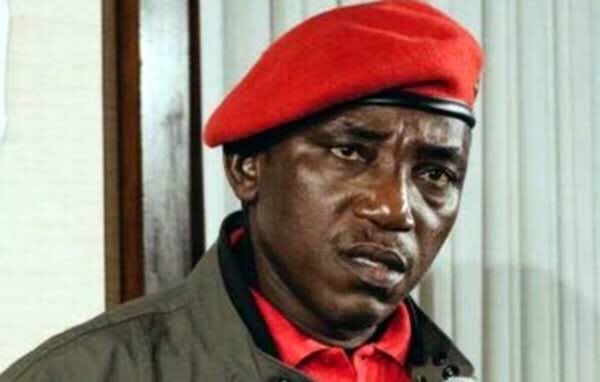 I am so happy for Mrs. Sharon Ikeazor @sharon_ikeazor of Anambra State. She’d make a good minister. #TheList #MinisterialList

I am happy that Godswill Akpabio, Dr Ali Isa Ibrahim Pantami have made the #MinisterialList. Only 11 of his former Ministers came back. 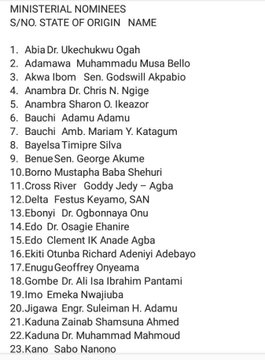 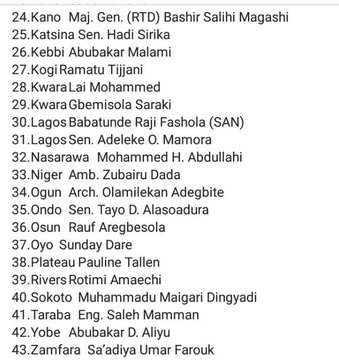 So Lai and Co. will make Nigeria an Eldorado in the Next Level.

No technocrat in the #MinisterialList

The much awaited #MinisterialList
So many new faces and a few old faces. #TheList

38 people are talking about this

even former governors and senators each are among the 43 ministerial nominees whose names were sent to the Senate for screening and confirmation on Tuesday.

The News Agency of Nigeria (NAN) reports that seven former governors made the list.

However, the ex-governors are not likely to enjoy same privileges with the former lawmakers during the screening exercise.
In the tradition of the Senate, the seven former lawmakers will be asked to take a bow and avoid all the questions and answers that normally characterise the exercise as a mark of respect.

Similarly, a current member of the House of Representatives on the platform of Accord Party (AP), Rep. Emeka Nwajiuba (Imo), made the list and he is expected to be treated like the former senators.

Nwajuiba, who was also in the lower chamber of the National Assembly between 1999 and 2003, represented Ehimembano/Ihitteuboma/Obowo/Okigwe South Federal Constituency of Imo.

NAN also confirms that the screening will commence on Wednesday in alphabetical order starting with Abia and ending with Zamfara.