Spread the love
thanks for the views we appreciate : 1,831 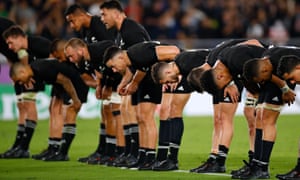 After the final gong had sounded on this rousing contest, New Zealand’s players still had the presence of mind to walk slowly around the emptying stadium, respectfully bowing to everyone present. It should have been the other way around; those lucky enough to witness this gripping game owed all the ferociously committed players involved a collective vote of thanks.

Respect is certainly due to the All Blacks for the first-half attacking excellence that, crucially, delivered 14 points inside four minutes just before the half-hour after South Africa had given the defending champions a serious early pounding. Those two converted scores for George Bridge and Scott Barrett were not the only reasons the defending champions ultimately prevailed – a stunning cover tackle by Richie Mo’unga on the brilliant Cheslin Kolbe was also crucial – but they undoubtedly tipped the scales.

It maintained New Zealand’s proud record of never having lost a Rugby World Cup pool game and throws down the gauntlet to every other hopeful team in the tournament. The abiding lesson of Super Saturday – and what a splendid triple bill of rugby it was – is that it will take something extra special from a third party to prevent these nations from returning to this same stadium for the final on 2 November.

The result, among other things, increases the probability of England facing the All Blacks in the semi-finals should they finish top of Pool C, while the Boks and Ireland could meet in the quarter-finals if Joe Schmidt’s men finish top of Pool A.

Every side in the competition will have noted New Zealand’s problem-solving ability, their remarkable discipline – they conceded two penalties to South Africa’s 11 – and their lethal ability to capitalise on loose kicks that fall anywhere within range of Beauden Barrett or his wings.

If the quicksilver Kolbe would surely have been man of the match had he finished what would have been one of the great solo World Cup tries, it was Barrett’s pace, positioning and running lines from full-back that helped the All Blacks sidestep onrushing trouble.

The debate over the 28-year-old’s best position is a red herring that becomes wholly irrelevant when he fizzes like this. Ardie Savea was also a serious ball of energy while Kieran Read’s calm captaincy was another influential positive.

New Zealand, chasing a third world title in succession, had to weather some prolonged periods of pressure, not least in the first quarter when South Africa’s rush defence caused real problems. Had Handre Pollard not crashed a straightforward penalty against a post the Boks would have led 6-0 with a kick-off reception to come but, instead, it was the catalyst for the decisive period.

Mo’unga’s deft cross-kick in his own 22 freed up the lively Seru Reece to make good ground and launch a flowing upfield move that ended with Barrett offloading out of a tackle by Eben Etzebeth to the supporting George Bridge.

Inside four minutes, New Zealand had a second long-range try on the board, Dane Coles putting Anton Lienert-Brown through a hole before the untouched Scott Barrett strode 25 metres to the line.

The last time New Zealand lost a game when leading by seven points or more at half-time, remarkably, was against France in the quarter-final of the 2007 Rugby World Cup. They have never been reeled in when presented with a lead of more than 12 points, which left South Africa facing a Mount Fuji-sized challenge.

They gave it a proper crack. Kolbe’s magical run down the right touchline was stopped at the last by Mo’unga – “It was a match-winner or close to it,” said his grateful head coach, Steve Hansen – before Pieter-Steph du Toit spotted a gap at the side of a ruck and dived over for a converted score to reduce the margin to 17-10.

Duane Vermeulen, playing his 50th Test, and Faf De Klerk then combined to create a thrilling charge straight through the heart of the All Black defence, with South Africa denied another score only by a crucial close-range turnover.

As expected, it was a blockbuster day of rugby, with Fiji putting up a fine display against Australia, France and Argentina playing out a classic in Tokyo, before New Zealand’s class proved a little too much for a very dangerous-looking Springboks side in Yokohama. I’ll be back tomorrow for Ireland v Scotland – see you then!