.
Spread the love
thanks for the views we appreciate : 3,228

Kiev, Ukraine (CNN)Ukrainian President Volodymyr Zelensky on Tuesday brushed aside claims that he was ready to announce an investigation into Burisma Holdings, a Ukrainian energy company linked to the son of former Vice President Joe Biden, following a phone call with President Donald Trump. 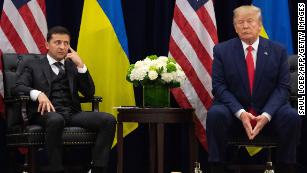 “I think everybody in Ukraine is so tired about Burisma. We have our own country. We have our independence, we have our problems and questions. That’s it,” Zelensky told CNN after making a statement to the press in the Ukrainian capital of Kiev.
Trump’s efforts to persuade Ukraine to investigate his political rivals led Congress to launch an impeachment inquiry against the President. Several US officials have testified that Zelensky’s government was close to announcing an investigation into the Bidens and Burisma following a phone call with Trump and contacts with US officials.

In his testimony, David Holmes, an aide to Taylor, said he heard Sondland’s call with Trump in a Kiev restaurant a day after the now infamous July 25 conversation, in which Sondland said Zelensky would “do the investigation” and would do “anything” Trump asks him to.
Kremlin spokesman Dmitry Peskov said Tuesday that the impeachment hearings in Washington had stirred “Russophobic attitudes.”
Asked by CNN in a conference call to respond to statements from Democrats and witnesses that Trump’s conduct benefited Russian President Vladimir Putin, Peskov said: “You know that whenever Americans are on the eve of an election process, they are very much susceptible to the exacerbation of Russophobic attitudes. And they didn’t avoid that fate this time as well.”

“What is happening there, of course, is being watched with great interest around the world, including in our country, but we don’t want to comment on this. Let the Americans overcome this and handle it, it is their internal affair. We never interfered in their internal affairs, and are not going to interfere.”
The US intelligence community has concluded that the Russian government was behind an orchestrated campaign to interfere in the 2016 US presidential election.

Ukraine Foreign Minister Vadym Prystaiko said at a Tuesday press conference that his country’s focus was on an upcoming four-way summit with France, Germany and Russia aimed at resolving the conflict in eastern Ukraine, rather than the impeachment inquiry in the US.

“Ukraine has always been proud of the support from both sides in the Congress, and we would like to maintain this support,” Prystaiko said. “Believe me, the last thing we want is getting involved in an issue on the other side of the world when we need to figure how to deal with the war with our French and German colleagues.”
CNN’s Darya Tarasova and Nathan Hodge contributed to this report from Moscow.