...
Oshiomhole’s Downfall: 6 lessons to learn I feel sorry for Oshiomhole. Ogbane.com.ng‘No Development Without Peace’: Buhari Calls For Unity In KadunaKaduna Has Attracted Over $800m Of Investments Since 2016 – El-RufaiEverybody Thinks State Governors Are Thieves, Says El-RufaiShares Of Banking Giant HSBC Plunge On Report Of China ‘Unreliable List’

Burna Boy Unfollows Wizkid Davido & Everyone on Instagram ! Now Has 4 Million Followers & Follows Only One Person . Who ?

By admin in swordpress on November 25, 2019
Spread the love
thanks for the views we appreciate : 699

Grammy award mood ? The reigning African Music Giant Burna Boy has Just Unfollowed wizkid, davido and every other person on Instagram except his girlfriend stefflon Don

Nigerian  Based Weboga took a look at his page early this morning, it shows the afro beat artiste is not following any of his 4.6millon followers except his girlfriend.

The reason behind this act remains unknown to the general public at the time of filing this report, Speculations from a few fans thinks burna boy is becoming too Big and he decides to Unfollow everyone that is not on same class with him 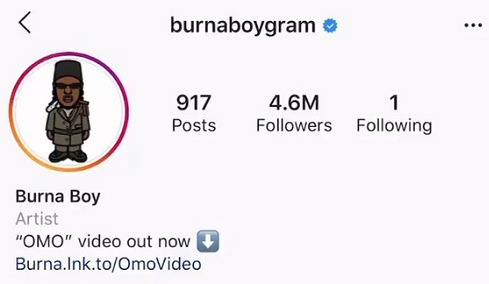 Definitely with time, we shall know his reason behind this!

You will Recall Burna Boy was nominated for the 2020 Grammy Awards last week, His latest album ‘African Giant’ was nominated in the Best World Album category. Other contendersfor the same win are Altin Gün for Gece, Bokanté & Metropole Orkest Conducted By Jules Buckley for What Heat, Nathalie Joachim With Spektral Quartet for Fanm D’Ayiti, and Angelique Kidjo for Celia.

Burna Boy joins the likes of other Nigerian acts Seun Kuti, Femi Kuti and King Sunny Ade who have been nominated in the same category.

Babatunde Olatunji, Wizkid, Timaya and Kah Lo have also been nominated for the Grammys but Sikiru Adepoju remains the only Nigerian to win this highly revered award.

The award ceremony will be held in February 2020.