Boeing Fires CEO – He Will Get package of $62 Million After 2 Plane Crashes ! www.boe.i.ng is for sale rent or lease

Fired Boeing C.E.O. Muilenburg Will Get More Than $60 Million
Dennis A. Muilenburg, who was ousted last month, forfeited stock awards worth some $14.6 million, but he is still contractually entitled to receive other benefits.

Dennis Muilenburg is contractually entitled to receive stock and pension awards worth $62.2 million. 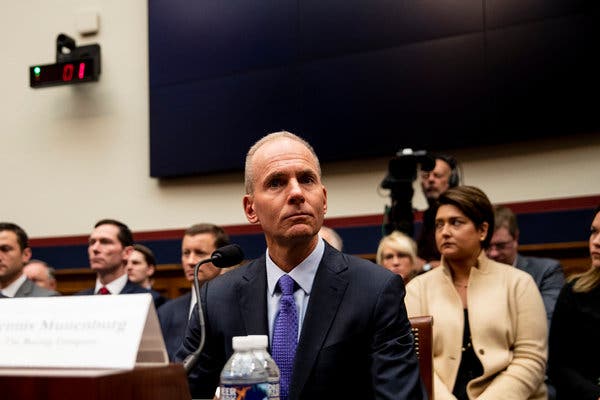 Dennis A. Muilenburg, who was ousted as Boeing’s chief executive last month as the company contended with the biggest crisis in its history, will depart with more than $60 million, the company said Friday.

Mr. Muilenburg will not receive any additional severance or separation payments in connection with his departure, and Boeing said he had forfeited stock units worth some $14.6 million.

But the value of the other stock and pension awards he is contractually entitled to receive is worth $62.2 million, the company said. Mr. Muilenburg also has stock options that could be worth many millions more.

“We thank Dennis for his nearly 35 years of service to the Boeing Company,” the company said in a statement. “Upon his departure, Dennis received the benefits to which he was contractually entitled and he did not receive any severance pay or a 2019 annual bonus.”

Boeing’s new chief executive, David Calhoun, will receive a $7 million bonus if he is able to get the 737 Max, which has been grounded since March, safely flying again. The jet was grounded in the wake of two deadly crashes that left 346 people dead.

The issue of Mr. Muilenburg’s compensation was the source of heated exchanges during his testimony before Congress in October.“Are you taking a cut in pay? Are you working for free from now on until you can cure this problem?” Representative Stephen Cohen, Democrat of Tennessee, asked Mr. Muilenburg at one point. “These people’s relatives are not coming back. They’re gone. Your salary is still on.”

Mr. Muilenburg’s blanched, noting that the board determines his pay.

After the hearings, Mr. Muilenburg called Mr. Calhoun, then the Boeing chairman, and offered to forgo any compensation until the Max had fully returned to service. Speaking at a New York Times conference soon after that, Mr. Muilenburg said he decided to give up “tens of millions of dollars” after meeting with families of victims of the crashes.

“I felt it was important for me to forgo those bonuses and send a message of responsibility,” he said.

Boeing said Mr. Calhoun, who starts as chief executive on Monday, would receive a base salary of $1.4 million and be eligible for an annual target bonus of $2.5 million, long-term incentive awards worth $7.5 million and restricted stock units worth $10 million.

Mr. Calhoun will receive an additional bonus of $7 million if the company reaches key milestones, including fully returning the Max to service.

Boeing also said that Kevin McAllister, who was ousted as head of Boeing Commercial Airplanes last year for his mishandling of the Max crisis and key customer relationships, had forfeited stock and dividend awards worth $52.9 million.

Mr. McAllister received a cash payment of $14.75 million, which reflected the value of a pension benefit he forfeited when he left an earlier job, but did not receive any other compensation in connection with his departure.