The billionaire Japanese entrepreneur Yusaku Maezawa is due to announce which of his Twitter followers will receive a share of the $9 million he promised to give away as part of a social experiment.

The founder of Zozotown, Japan’s largest fashion retail website, tweeted on January 1 that he would be giving away 1 billion Japanese yen ($9.1 million) to 1,000 people, equating to $9,118 per person.

In order to take part, Twitter users needed to follow Maezawa and retweet his message, according to a translation. The competition closed just before midnight on January 7. 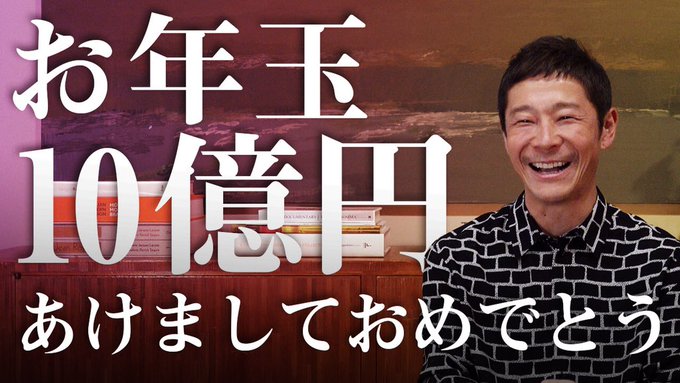 4.5M people are talking about this

Maezawa reportedly explained in a YouTube video that the winners would be chosen randomly and that the contest was a “serious social experiment,” testing whether this money would make recipients happier.

The mogul also said that the impact of the experiment on winners would be monitored with regular surveys about how they’re using the money, according to reports.

In follow up tweets, he said winners would be messaged directly on the social media platform next week.

However, he cautioned participants against “fraudulent” messages, emphasizing that the official direct messages sent to the winners would also be tweeted out in advance.

In his most recent tweet, Maezawa hinted he was thinking of taking the experiment global, asking if there were any groups or people “anywhere in the world” who would like to try something similar within their own community or region “to try and change their society too.”

My 10 billion yen giveaway project has been spreading rapidly worldwide. Will people’s lives and labor productivity improve when given BI-like income or temporary benefits? This will be a social experiment conducted in Japan that’ll draw global attention. https://edition.cnn.com/2020/01/09/business/japanese-billionaire-give-away-9-million-twitter-trnd/index.html …

A Japanese billionaire will give away more than $9 million to 1,000 people on Twitter to see if it improves their happiness. All they had to do to get it was retweet him.

20K people are talking about this

This is the second time Maezawa has taken to Twitter to give away part of his fortune, having shared 100 million Japanese yen ($923,000) between 100 people last January.

It became the most retweeted tweet ever at the time, with nearly 5 million shares, while this year’s contest earned 4.1 million retweets.

Maezawa is the 22nd richest person in Japan, according to Forbes, with a fortune of $2 billion. In 2017, he paid a record $110.5 million for Jean-Michel Basquiat’s “Untitled” painting.

He started out selling CDs and records of his favorite bands by mail from home and set up Zozotown in 1998.

Maezawa came more into the public eye in 2018, when SpaceX CEO Elon Musk said the Japanese billionaire would be the first private customer on the company’s rocket to the moon.