We strive for accuracy and fairness. If you see something that doesn't look right, contact us! info@tweeterest.com
Spread the love
thanks for the views we appreciate : 1,320 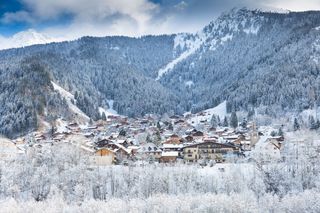 A U.K. man infected with the new coronavirus, 2019-nCov, likely spread the virus to 11 others while staying at the French Alpine ski resort of Le Contamines-Montjoie.
(Image: © Shutterstock)

A British man who contracted the new coronavirus on a business trip spread the virus to 11 other people from three countries, according to news reports.

The man, who is in his 50s, had visited Singapore for a sales conference from Jan. 20 to Jan. 22, according to The Guardian. A little more than 100 people attended the conference, and one participant was from Wuhan, the Chinese city where the outbreak of the new coronavirus, called 2019-nCoV, is thought to have originated. Officials believe the British man became infected with 2019-nCoV at the conference.

Not knowing he had contracted the virus, the man traveled from Singapore to a French ski resort, where he stayed with family from Jan. 24 to Jan. 28, The Guardian reported.

Given how many coronavirus cases are connected to the British man, he seems to be a superspreader, or someone who passes on a pathogen to an unusually large number of people. Previous studies have found that people infected with 2019-nCoV spreato just two other people, on average.

The man is now hospitalized in London, according to The Guardian. Officials are continuing to track down people who had contact with the man, such as those who were on his returning flight to the U.K.

A GP practice in Brighton has been temporarily closed after a staff member tested positive for coronavirus.

Patients at the city’s County Oak medical centre have been advised to contact the NHS 111 phone service if they have concerns.

Two of the eight people diagnosed in the UK are understood to be GPs.

The Department of Health has called the virus a “serious and imminent threat” to public health, but the overall risk to the population is “moderate”.

However, the risk to individuals is low, the department said.

A school in Southampton has also closed over concerns about the virus.

Brackley Medical Centre in Northamptonshire was also closed as a precautionary measure, but later reopened.

There have been more than 40,000 cases of the virus globally, mostly in China. The total number of deaths in China is now 1,011.

Four new UK cases were announced on Monday – taking the total number of people infected in the UK to eight.

Two of the new cases are understood to be GPs – one of whom works at the County Oak medical centre.

A sign put up at the surgery said it had been closed “for extensive cleaning as a precautionary measure” and would be open as soon as possible, hopefully on Tuesday afternoon.

One of the eight UK cases is a British man who caught the virus at a conference in Singapore and travelled to a ski resort in France.

He was diagnosed in Brighton, and is being treated at St Thomas’ Hospital in London.

He has been linked to five of the other cases.

In addition to the eight cases in the UK, five British nationals tested positive in France following the Brighton man’s trip to the ski resort.

A British man has also been diagnosed with coronavirus in Majorca after coming into contact with a carrier in France.

Tedros Adhanom – director general of the World Health Organization – told a press conference on Monday that cases such as those in the UK and France “could be the spark that becomes a bigger fire”.

Meanwhile, the Department of Health has introduced new measures in England that mean those in quarantine will not be free to leave their accommodation, and can be forcibly sent into isolation if they pose a threat.

The move comes after a passenger on the first UK flight from Wuhan, who is being held in quarantine on the Wirral, had been “threatening to abscond” despite signing a contract agreeing to the isolation period.

What are the symptoms of coronavirus and what can help stop its spread?

The main signs of infection are fever (high temperature) and a cough as well as shortness of breath and breathing difficulties.

Frequent hand washing with soap or gel, avoiding close contact with people who are ill and not touching your eyes, nose and mouth with unwashed hands, can help cut the risk of infection.

Catching coughs and sneezes in a tissue, binning it and washing your hands can minimise the risk of spreading disease.

Anyone experiencing symptoms, even if mild, after travelling from mainland China, Thailand, Japan, Republic of Korea, Hong Kong, Taiwan, Singapore, Malaysia or Macau, is advised to stay indoors and call the NHS 111 phone service.

What is the government doing?

The main focus is on rapidly identifying people with the disease and taking them to specialist hospitals for treatment in isolation.

They are then tracing anybody who has come into close contact with patients to make sure they know the signs of the disease and what to do.

Arrowe Park Hospital, on the Wirral, and Kents Hill Park conference centre, in Milton Keynes, have been designated as “isolation” facilities in the UK.

Evacuees from Wuhan who travelled to the UK on two flights chartered by the Foreign Office are currently in quarantine at those locations.