Coronavirus – China Rejects it Started in Wuhan As Analysts Relieved it did not Start in India! www.beij.i.ng

Spread the love
thanks for the views we appreciate : 906

CNBC.com · 2 days ago
Beijing objects to term ‘Wuhan coronavirus,’ and says it may not have originated in China 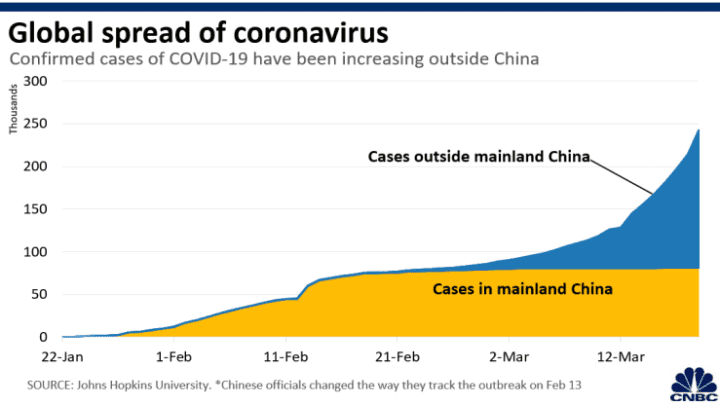 “Thank God this didn’t start in somewhere like India, because there’s absolutely no way that the quality of Indian governance could move to react in the way that the Chinese have done,” O’Neill, the former Goldman Sachs chief economist, told CNBC’s “Squawk Box Europe” on Wednesday.

“That’s the good side of the Chinese model, and I think you could probably say the same about Brazil too,” he added.

Indian Prime Minister Narendra Modi convened a government meeting at the weekend and directed officials to identify suitable locations for quarantine facilities and make provisions for critical care. At present, India has only 73 confirmed cases, according to Johns Hopkins University data.

The country has suspended all existing visas except for diplomatic and official UN and international organization visits until April 15 and requires all incoming travelers, including Indian nationals, arriving from or having recently traveled to China, Italy, Iran, Korea, France, Spain and Germany to enter a minimum 14-day quarantine.

“The next sortie by the Indian Air Force aircraft to evacuate Indian national is expected in couple of days. An Indian medical team is already stationed in Qom, Iran to assist the local authorities in screening COVID-19 cases,” Negi told CNBC.

“The above points illustrate to a significant degree India’s pro-active efforts in mitigating the spread of COVID-19 which resultantly has put the actual number of cases within India to a minimal given the size of the population.”

Coronavirus pressures policymakers to be more creative: Chatham House chair
China response
On one hand, O’Neill acknowledged that the dominance of President Xi Jinping and the diminished responsibility of officials in Wuhan, where the virus originated, may have enabled COVID-19 to initially spread quicker.

“That said — and it’s often like a lot of other things when China got hit with a crisis over the last 30 years — once they realized the scale of it, the system seems to be capable of dealing with it pretty quickly, relative to other places, and pretty decisively,” O’Neill contended.

Chinese authorities suppressed early warnings from doctors and citizens in Wuhan and forced them to apologize for spreading “lies” and in turn failing to contain the outbreak in its infancy. The government has been widely criticized for its delayed response at the outset, with Raymond James analysts likening the situation to the Soviet Union’s handling of the Chernobyl nuclear disaster.

Ophthalmologist Li Wenliang sounded the alarm in December when he told a group of doctors on Chinese social media about seven cases he saw. He and seven other whistleblowers were reprimanded by the Wuhan police in January for spreading “illegal and false” information.

Chinese authorities shut down vast swathes of the country’s travel infrastructure and industrial production last month, causing a profound short-term shock to the Chinese and global economy. However, new cases of the virus in greater China have now slowed to a trickle, while Italy deals with a rapid escalation in new infections and a spiking death toll.

Negi highlighted that the Indian government supplied 15 tons of medical assistance comprising masks, gloves and other emergency medical equipment to China on 26 February 2020.

The outbreak is now a global pandemic while new cases in China have begun to slow, and Beijing is now attempting to cast doubt over whether the virus actually originated in China at all.