Gunmen suspected to be kidnappers have abducted the Caretaker Chairman of Kaura Local Government Area of Kaduna State, Bege Katuka.

A commercial motorcyclist was reportedly killed during the kidnapping incident.

Although the police and government authorities are yet to confirm the incident, sources told Channels Television that the council chairman was kidnapped on his way to his farm located around Juji village in Chikun Local Government Area.

He was said to have boarded a commercial motorcycle to his farm when the gunmen ambushed them.

The gunmen reportedly shot the commercial motorcyclist to death and thereafter took the council chairman away to an unknown destination.

In recent times, Juji and some other communities in Chikun Local Government Area have come under heavy attacks by kidnappers, with several people abducted and others later released after paying millions of naira as ransom.

The Borno State Police Command have released the names of the officers killed by Boko Haram ambush on Saturday.

Commissioner of Police, Bello Makwashi listed the names of his dead personnel on Monday when Borno Governor, Babagana Zulum visited the Command Headquarters in Maiduguri, the state capital.

“During the encounter, I want to name the names of those that lost their lives and paid the supreme price,” Makwashi said.

The police boss told the governor that the State Command had to break the sad news to the families of those in Maiduguri, adding that some were still on their way coming.

Meanwhile, the wives of the slain officers have appealed to the governor for support during the trying moment.

Mrs Effa David Jarta who spoke on behalf of the widows said they received the news of the unfortunate incident that claimed the lives of their breadwinners in utter shock, adding that “it is not easy.”

“It is God’s design for them, everybody will die but our prayer is to consider us. Let the government see us and pay all the benefits of our husbands. This is all I have to tell you.”

Mrs Joseph thanked the governor for his visit but said “consider us and the situation we are in.”

On his part, Governor Zulum expressed deep regret about the incident which he said was the first in 18 months since he became governor.

He however assured the women of his commitment to support their livelihood efforts and the education of their children.

“I am standing before you here, I am not here to just see you and go back. God willing we shall not let you down, we shall support you.” Zulum assured.

This comes three days after Boko Haram ambushed the convoy of the state government.

The convoy ran into an ambush by Boko Haram at a spot called Korochara, which is about 2km away from the base of the Multi-National Joint Task Force on the way to Baga from Monguno. 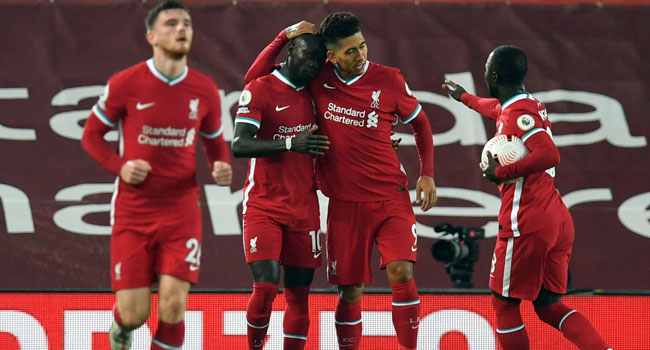 Senegalese striker, Sadio Mane netted a goal as Liverpool on Monday handed Arsenal a 3-1 defeat, the first loss for the Gunners this season.

Goals from Andy Robertson and Diogo Jota saw off the Gunners, who had won their opening two league games of the season.

While Manchester City, Chelsea, Manchester United, Tottenham and now Arsenal have all lost in the opening three weeks of the new campaign, Liverpool have taken maximum points to lay down an early marker that they remain the team to beat in the Premier League this season.

Arsenal followed the game plan that had brought them two victories over Liverpool in recent months as they dropped deep then looked to play around the Reds’ press when in possession.

However, unlike when they met at the back end of last season’s Premier League when Jurgen Klopp’s men had already won the league or the Community Shield in August, Liverpool were far sharper in pulling the Gunners out of position.

The only time Arsenal did manage to pierce the Liverpool press before half-time, they opened the scoring completely against the run of play.

Robertson was at fault as he spooned Ainsley Maitland-Niles’s cross into the path of Lacazette, who also failed to make a proper connection, but the ball bounced into the ground and looped over the helpless Alisson Becker.

Liverpool responded immediately to level within three minutes as Mohamed Salah outmuscled Tierney and when his shot was parried across goal by Leno, Mane turned into an empty net.

Robertson them made amends for his previous error as Liverpool’s flying full-backs combined as Alexander-Arnold’s cross was this time converted by the Scotland captain.

However, where Arsenal sides of recent years might have collapsed, as they did in losing 4-0 and 5-1 at Anfield in 2018 and 2019, Mikel Arteta has instilled a new-found belief in the FA Cup winners.

The visitors were more expansive after the break and created a huge chance to level when Dani Ceballos put Lacazette through on goal, but Alisson stood up well to block the French striker’s shot.

“When you come to Anfield you are not going to get 10 chances.  When you are one-on-one with the goalkeeper, you have to score,” said Arteta as Liverpool extended their unbeaten run at home in the Premier League to 61 games.

“It is a really tough place to come for anyone in the world, they set incredible standards.

Klopp introduced Jota for his league debut 10 minutes from time and the Portuguese international quickly showed why Liverpool spent £41 million ($52 million) to sign him from Wolves.

Goalkeeper Mattia Perin and midfielder Lasse Schone missed Genoa’s 6-0 Serie A defeat at Napoli on Sunday after contracting Covid-19, and 12 others returned positive tests after the game.

“After today’s tests, the number of positive COVID-19 employees has risen to 14 between team members and staff,” Genoa said in a statement.

“The club has activated all the procedures provided for by the (virus) protocol and informed the relevant authorities. The club will give updates as the situation evolves.”

Italian media report that of the positive cases at Genoa 10 are players and four are staff.

The Genoa-based club said Balde had “tested weakly positive” during his medical which did not reveal any other problems.

“It is specified that he has not had contact with the ‘Team Group’ and is self-isolating” the club added of Balde, who arrived in Genoa on Monday morning for his medical.

A club in a Gulf country has for the first time signed an Israeli footballer, Diaa Sabia, less than two weeks after the UAE normalised ties with the Jewish state.

“Al-Nasr has completed the procedures with Diaa Sabai … in a contract that extends for two seasons after he successfully passed medical examinations this morning,” it said in a statement.

Sabia’s move comes after the United Arab Emirates, of which Dubai is a member, signed a US-brokered accord to normalise ties with Israel on September 15, the first such deal with a Gulf nation.

Sabia — who is of Palestinian origin — was born in northern Israel and rose through the ranks of a youth club before moving to Maccabi Tel Aviv in 2012.

He played for several Israeli clubs until signing in 2014 with Maccabi Netanya, where he stayed for four years.

Sabia has scored 50 goals in 111 games in various competitions, including 24 in the 2018 season, and has 10 caps in the Israeli national team.

He was sold to Guangzhou R&F for more than four million euros.

Several Israeli Arabs have played in the Palestinian national team.