Spread the love
thanks for the views we appreciate : 610 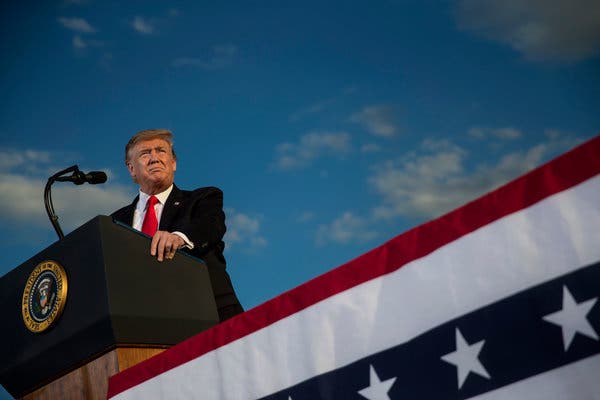 1156
President Trump said in a new interview that he would gladly take incriminating information about a campaign opponent from countries like Russia.
Credit
Eric Thayer for The New York Times

Image
President Trump said in a new interview that he would gladly take incriminating information about a campaign opponent from countries like Russia.CreditCreditEric Thayer for The New York Times
In a new interview with ABC News’s George Stephanopoulos, parts of which were released on Wednesday evening, Donald Trump announced his willingness to betray and subvert American democracy, again. Asked what he would do if he were offered foreign dirt on an opponent in 2020, he said he’d take it, and pooh-poohed the idea of calling federal law enforcement.

That Trump has no loyalty to his country, its institutions and the integrity of its elections is not surprising. That he feels no need to fake it is alarming. With the end of Robert Mueller’s special counsel investigation, House Democrats’ craven fear of launching an impeachment inquiry, and the abject capitulation of Republicans to Trumpian authoritarianism, the president is reveling in his own impunity.

Maybe the insult of it can jolt the country out of its current stasis. Every so often, Trump says or does something so grotesque that it cuts through the despairing numbness engendered by his presidency, galvanizing the forces of decency anew. It happened after Trump defended white supremacists who marched in Charlottesville, after he compared nonwhite countries to excrement, and after he bowed and scraped before Vladimir Putin in Helsinki. This should be one of those moments.

That doesn’t mean it will be. Much of the Resistance is exhausted by last year’s push to retake the House and deflated by the anti-climactic aftermath of the Mueller report. For two and a half years, as Trump has treated his oath of office the way he’s rumored to have treated a Moscow hotel bed, it’s felt as if something has to give. But day by day, what’s giving is the will to stop him.

Just this week, the administration announced plans to move migrant children to an Oklahoma military base that formerly served as a Japanese internment camp. On Tuesday, responding to reports that the murdered half brother of North Korea’s Kim Jong-un was a C.I.A. source, Trump sided with the totalitarian dictator. “I would tell him that would not happen under my auspices,” he said, meaning, as best as anyone could make out, that he wouldn’t let American intelligence spy on his dear homicidal friend.It’s all shocking and outrageous, but few can summon shock or outrage anymore. Many of us are struggling to ward off learned helplessness, the depressed, withdrawn state created when terrible things keep happening and you feel powerless to stop them.

But Trump’s opponents are not powerless. They helped halt at least the first iteration of Trump’s Muslim ban when they rushed to airports in protest. They saved the Affordable Care Act when they flooded congressional town halls. They flipped the House despite the advantage Republicans secured for themselves through gerrymandering. And they could demand, now, that their representatives shore up our democracy against a president determined to defile it.

Trump’s professed willingness to accept foreign intelligence on domestic political foes represents more than just another norm-eviscerating outburst. It’s an action in and of itself. On July 27, 2016, Trump publicly asked Russia for help obtaining Hillary Clinton’s emails: “Russia, if you’re listening, I hope you’re able to find the 30,000 emails that are missing,” he said. Thanks to Mueller, we now know that Russian intelligence started trying to hack Clinton’s server just hours later. Intelligence services in countries that benefit from the Trump presidency — including Russia, North Korea and Saudi Arabia — may take this latest invitation equally seriously.

So what can you do? Well, this weekend, there will be nationwide demonstrations to demand that Congress open an impeachment inquiry. But there should also be pressure on the Senate, where the majority leader, Mitch McConnell, has made himself Trump’s partner in the dismantling of our system of government.

Democrats have introduced bills that would require political campaign officials to disclose foreign contacts. McConnell, of course, will almost certainly not bring them to a vote; he is single-handedly blocking all election-security proposals.

Any senator, however, could try to force McConnell’s hand by exploiting the Senate’s unanimous consent process, rote agreements that the body uses to waive time-consuming procedural steps. “The Senate needs unanimous consent to run,” Jeff Blattner, the former chief counsel to Senator Ted Kennedy, told me. If Democratic senators consistently refuse to grant it, nothing would get done. “Think of it as throwing a log into the gears,” said Blattner. “Everything grinds to a halt.”

Such a measure should probably be used only in a crisis. But a president who actively solicits foreign help in shoring up his minority rule is a crisis, even if Trump has brutalized our civic culture to the point where it feels ordinary.

Two years ago the president basically admitted to obstruction of justice on television when he told an interviewer, Lester Holt of NBC, that he’d fired James Comey as F.B.I. director because of the Russia investigation. Now he’s telling us, again on TV, that having gotten away with accepting foreign help in an election once, he’s planning to do it again. I know everyone’s tired. But democracy is not going to save itself.