.
Spread the love
thanks for the views we appreciate : 1,383

If Lauren Sanchez is upset by recent reports from friends that she bragged about dating the world’s richest man, she isn’t showing it.

Jeff Bezos’ pilot lover was all smiles after she successfully landed her helicopter at Santa Monica Airport on Monday.

The California weather was uncharacteristically dreary but Sanchez, 49, beamed as she gave her female companion a high-five after the smooth landing.

Sanchez, who runs her own aerial film production company, ignored the light sprinkling of rain as she examined the chopper before heading inside. 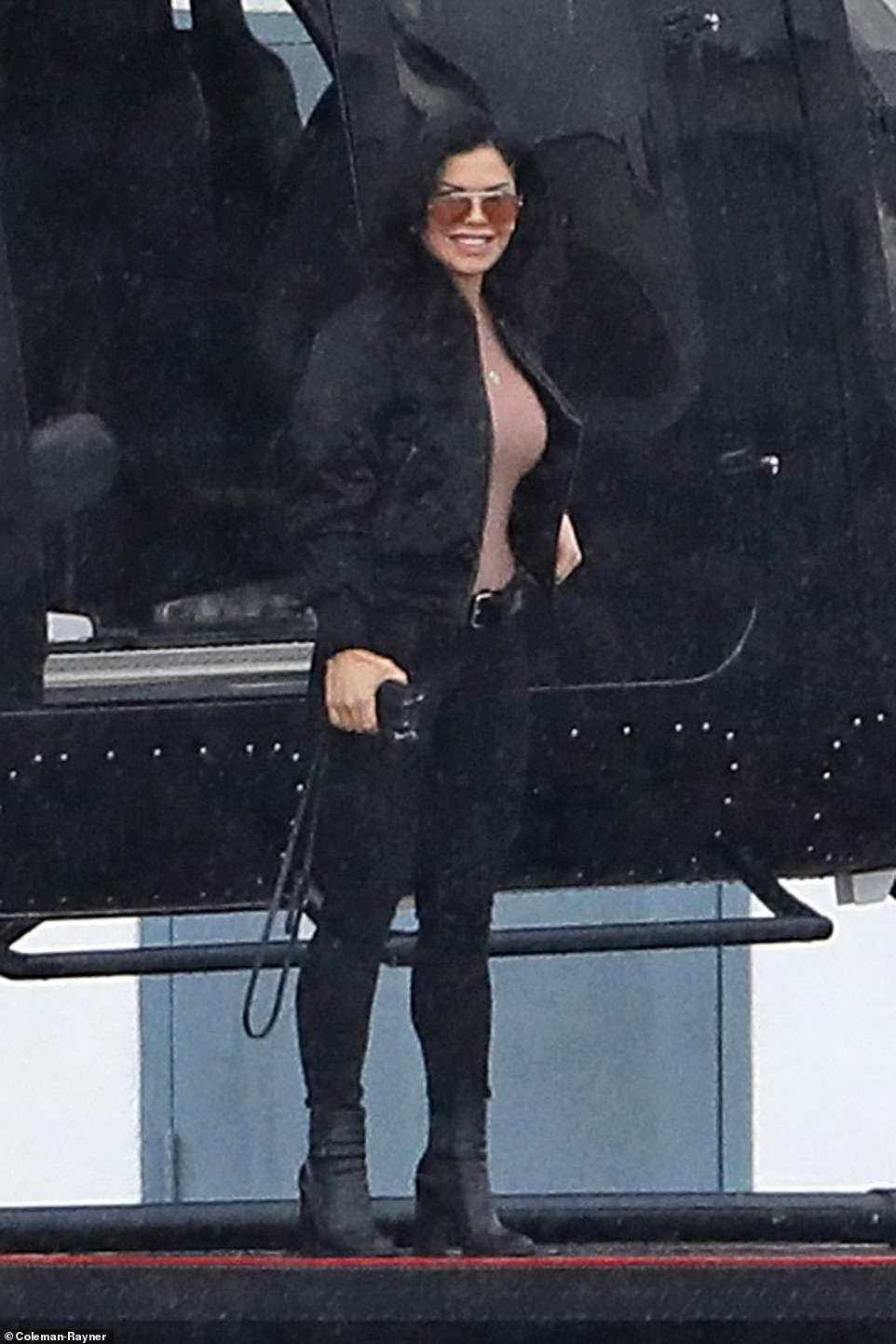 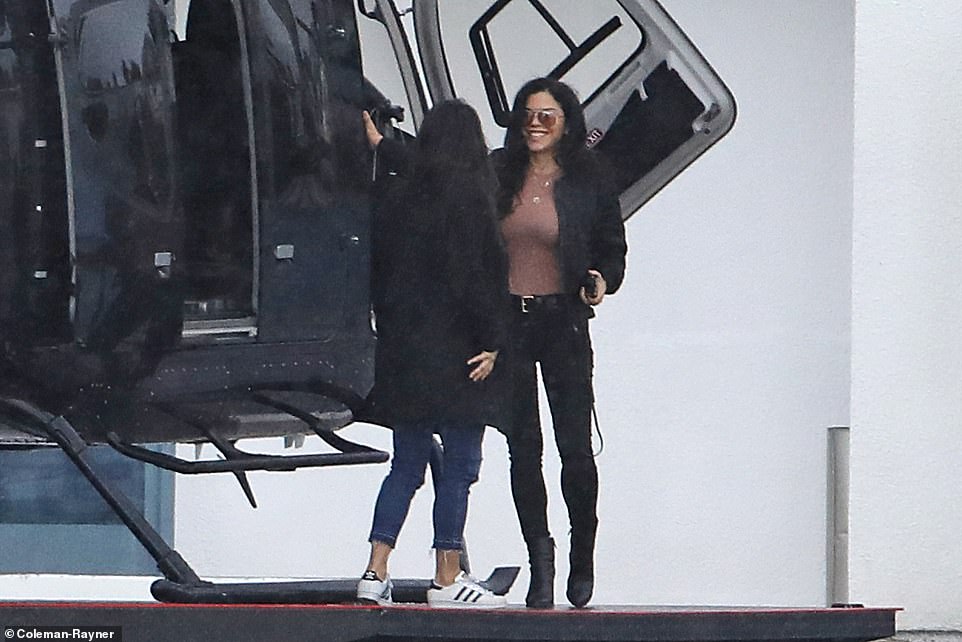 The California weather was uncharacteristically dreary, but Sanchez, 49, beamed as she laughed with friends

And she was dressed to impress for a day in the sky, adding five-inch ankle boots to spice up her outfit of black jeans, a black bomber jacket, and a peach shirt.

Sanchez was spotted just hours after a longtime friend claimed that the married TV anchor set her sights on Bezos after she and her Hollywood agent husband became friends with the billionaire in Seattle.

After meeting the Amazon CEO and his wife MacKenzie socially several years ago, Sanchez told a friend, ‘Now that’s the kind of guy I need,’ a close friend claimed to DailyMail.com, convinced she was referring to Bezos’s wealth.

Sanchez, who was revealed to be romantically involved with the billionaire shortly after he announced he was divorcing his wife of 25 years on Wednesday, has a penchant for ‘living large,’ the insider added. 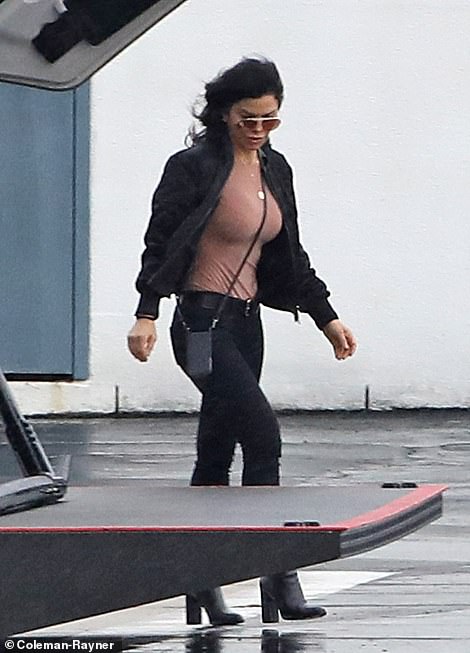 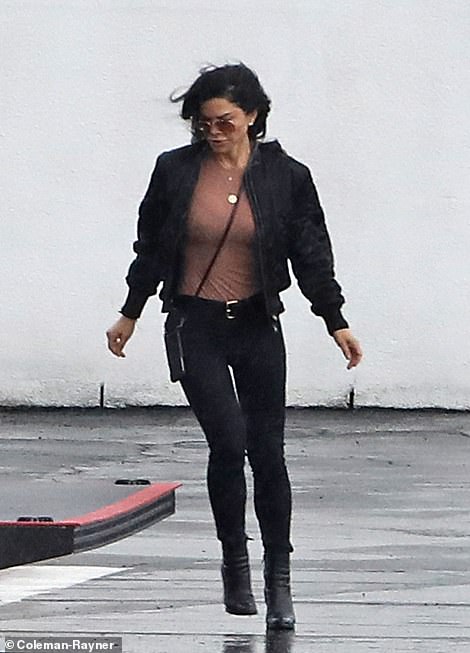 Sanchez was dressed to impress for a day in the sky, adding five-inch ankle boots to spice up her outfit of black jeans, a black bomber jacket, and a peach shirt 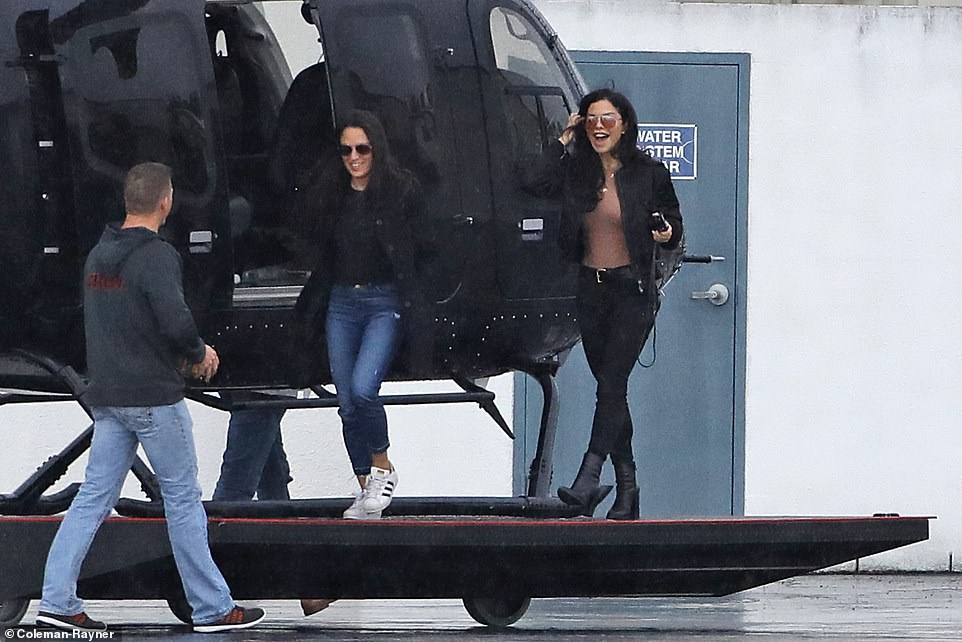 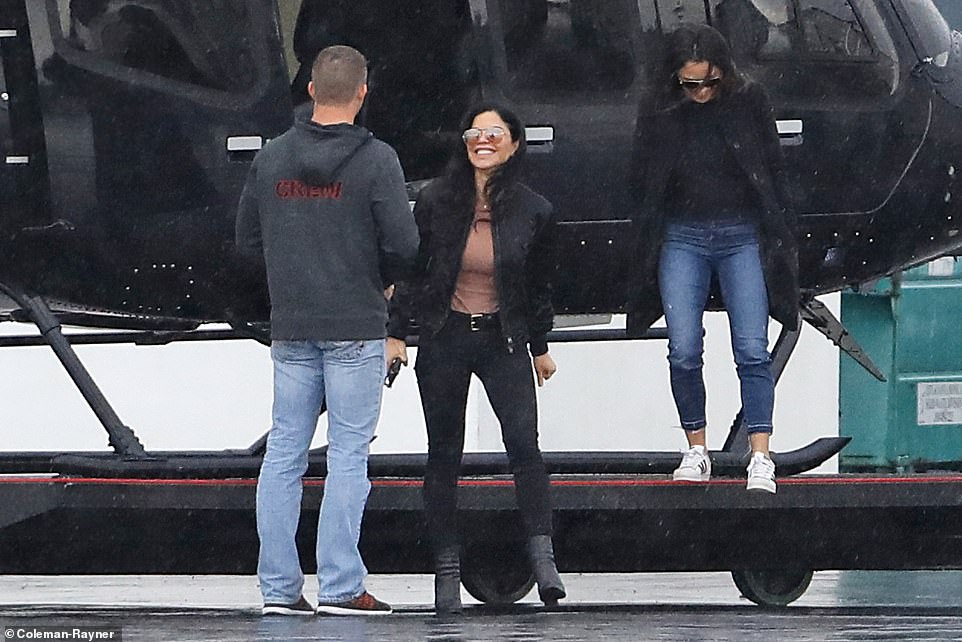 When one of the women asked her what her talent agent husband Patrick Whitesell, 53, would say, Sanchez supposedly replied: ‘Let’s find out.’

The friend, who wished to remain anonymous, told DailyMail.com: ‘She called him and asked: “Is it okay if I buy all these shoes?”‘ He told her yes.’

Sanchez then confided: ‘I have him wrapped – I can have anything I want.’

According to the friend, Sanchez is ‘very sweet but she was always a climber’.

Sanchez is a third-generation Mexican-American who was born in Albuquerque, New Mexico where she had a modest upbringing.

In a 2017 interview with the Hollywood Reporter, Sanchez revealed she ‘came from nothing’ and ‘used to sleep in the back of my grandmother’s car when she would go clean houses.’ 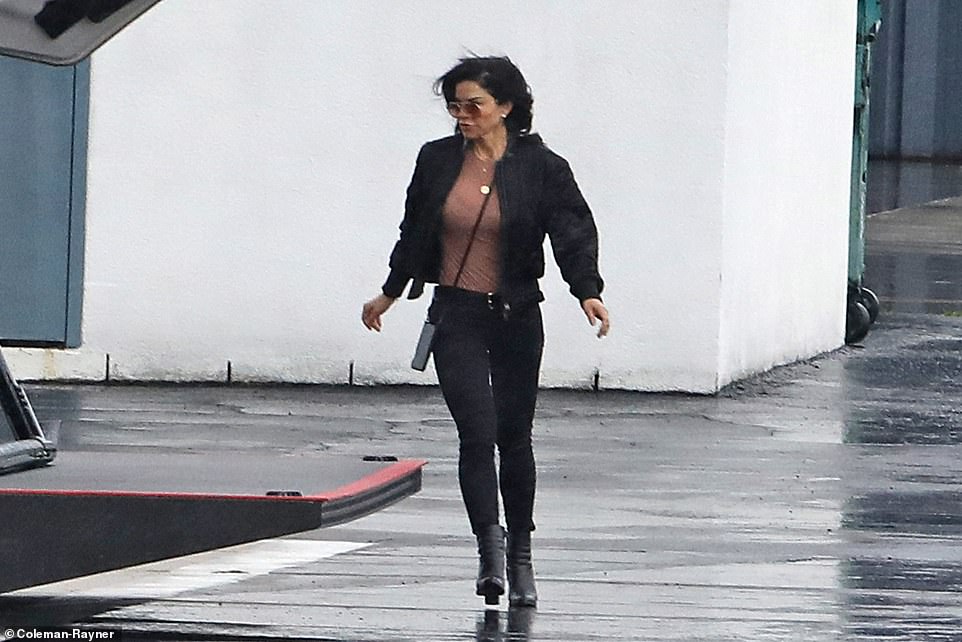 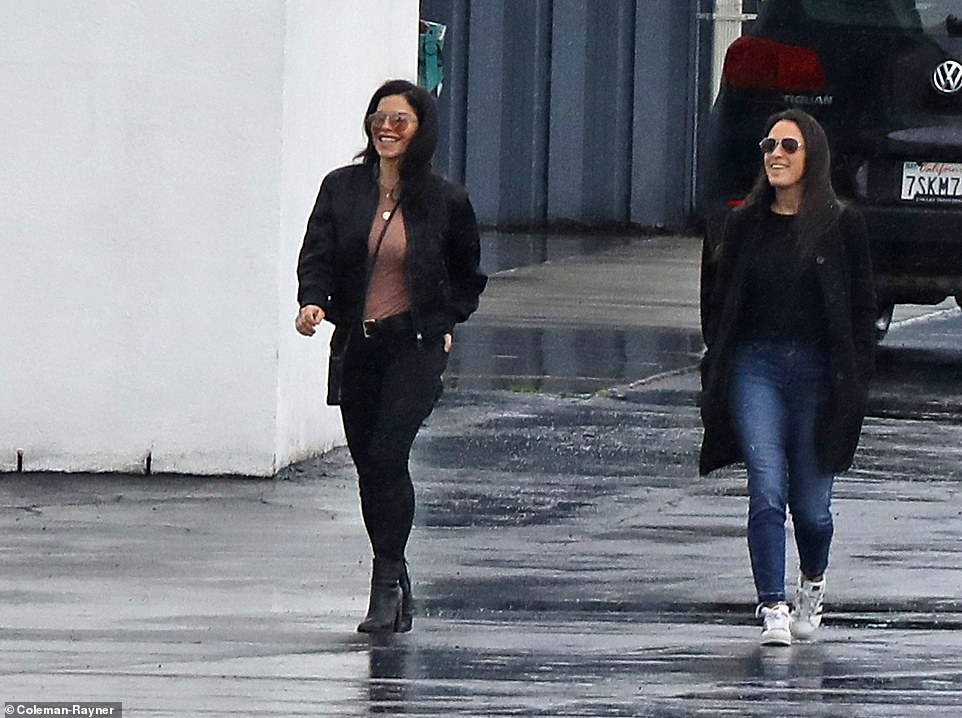 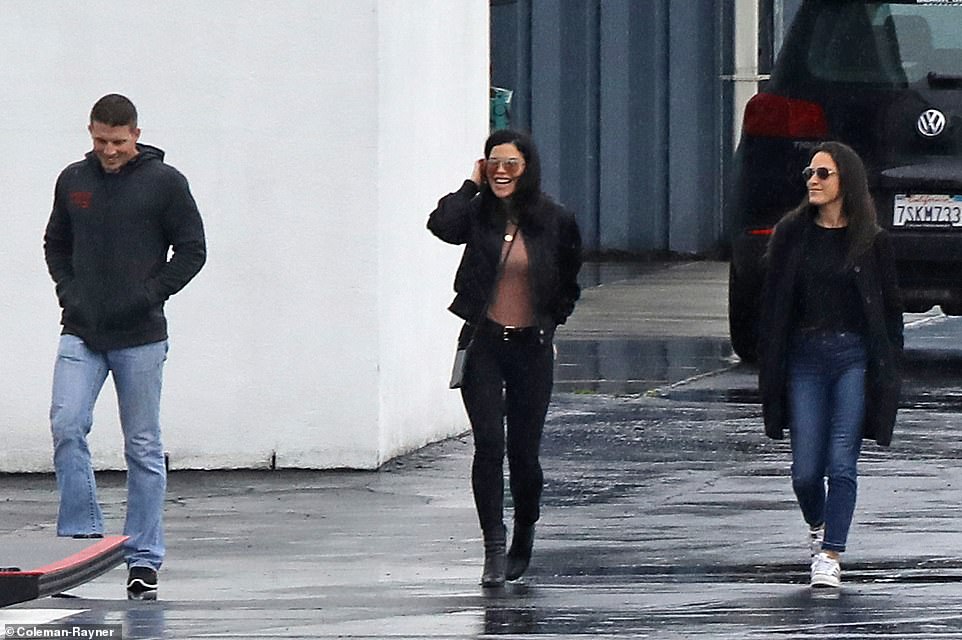 It was then claimed that Sanchez had been bragging to friends about her secret lover, even sending them the explicit texts and selfies Bezos had shared with her

Her career in news and entertainment kicked off when she moved to California for college, attending the University of Southern California on scholarship.

After graduation she landed gigs as a television host in Los Angeles, appearing on shows such as Extra, Showbiz Tonight, Fox 11 and Good Day LA.

She also made a number of appearances on the big screen, portraying a news anchor for movies including White House Down, Ted 2, and We Bought A Zoo.

But even as her hosting career flourished, Sanchez was finding out she was happiest behind the camera – and above the ground.

She started flying planes in 2011, working hard to pass her flight studies despite her struggles with dyslexia.

‘I literally had to put myself in a room and just cram to figure it out,’ she told the Hollywood Reporter in 2017.

‘They call them learning differences now, which is really sweet, but growing up I just thought I was stupid. My co-anchors knew I was dyslexic but not many more [did]. I felt like I had to hide it because it just wasn’t something that people talked about.’

By 2016 Sanchez had launched Black Ops Aviation, her own film aerial production company. 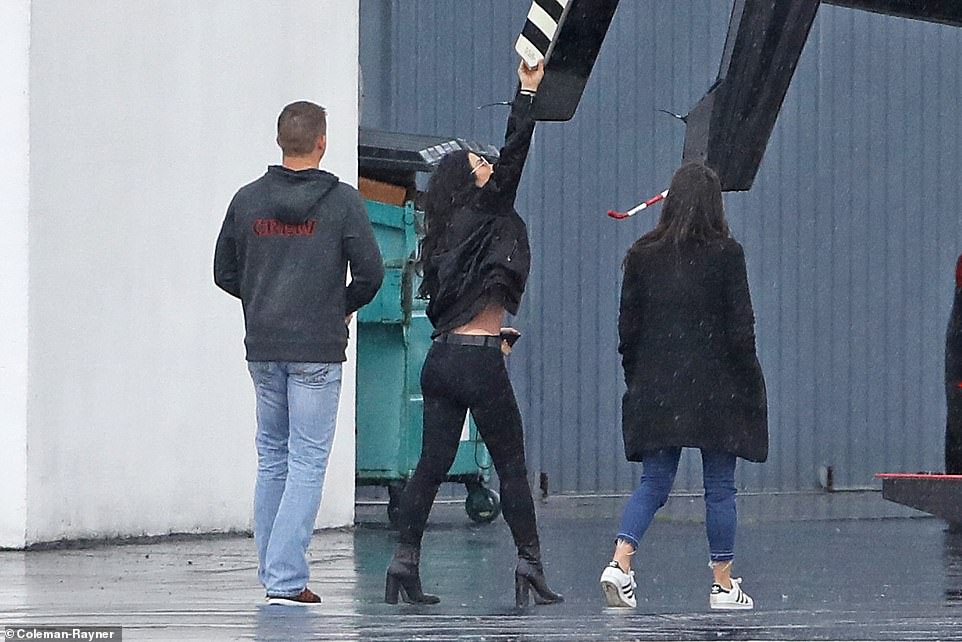 Sanchez, who runs her own aerial film production company, was clearly in her element as she examined the chopper on Monday 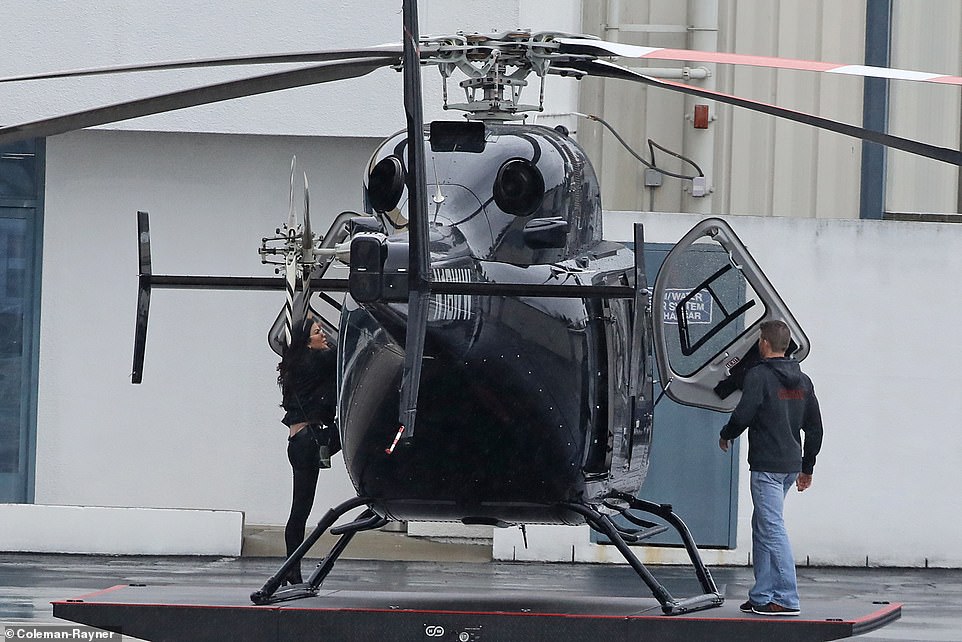 She could be seen getting into the chopper, which likely belongs to her production company ‘I had my job, I had a career, and then I found a calling,’ she said. ‘I loved entertainment and I loved filming, and so I got to combine all of it.’

‘Only six percent of pilots are women, and there’s even less in the film industry. So I was like, I want to film movies, that’s what I want to do.’

Sanchez served as a consultant for Christopher Nolan’s Dunkirk, and most recently worked as an aerial producer for the upcoming Miss Bala starring Gina Rodriguez.

‘I’m living my dream,’ she told Extra last year. ‘Everyone says, follow your passion. I loved being on camera and now I still have a camera, it’s just 3,000 feet in the air.’

Friends believe things between Bezos and Sanchez heated up after he hired her to do aerial shots for his side venture Blue Origin. 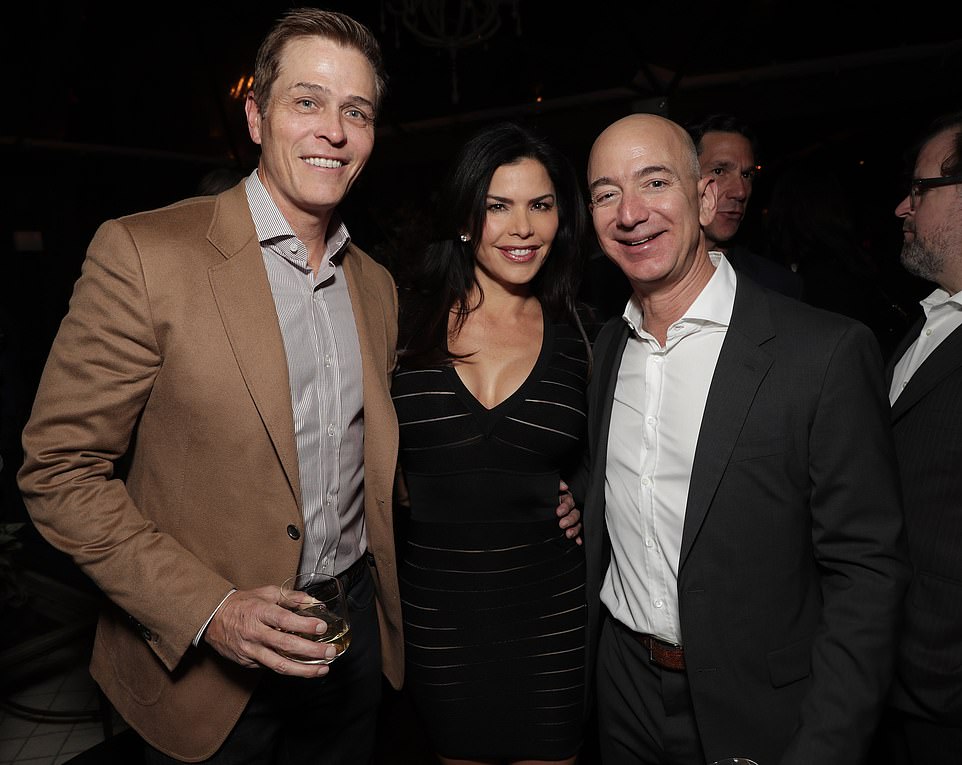 Friends believe things between Bezos and Sanchez heated up after he hired her to do aerial shots for his side venture Blue Origin. They are pictured here together with Sanchez’s husband Patrick Whitesell in December 2016 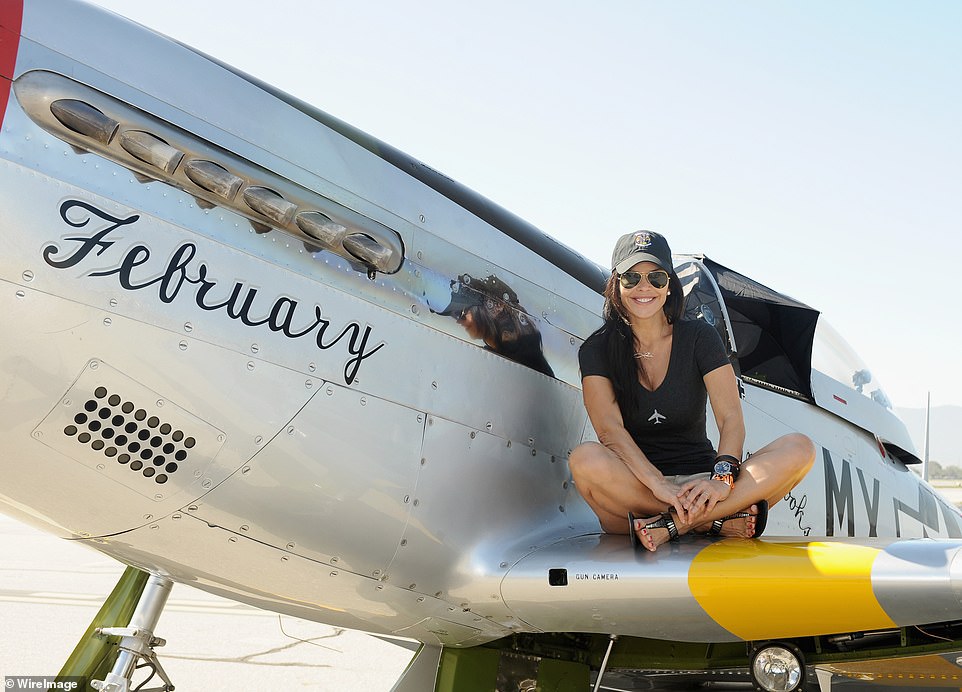 Sanchez served as a consultant for Christopher Nolan’s Dunkirk, and most recently worked as an aerial producer for the upcoming Miss Bala starring Gina Rodriguez 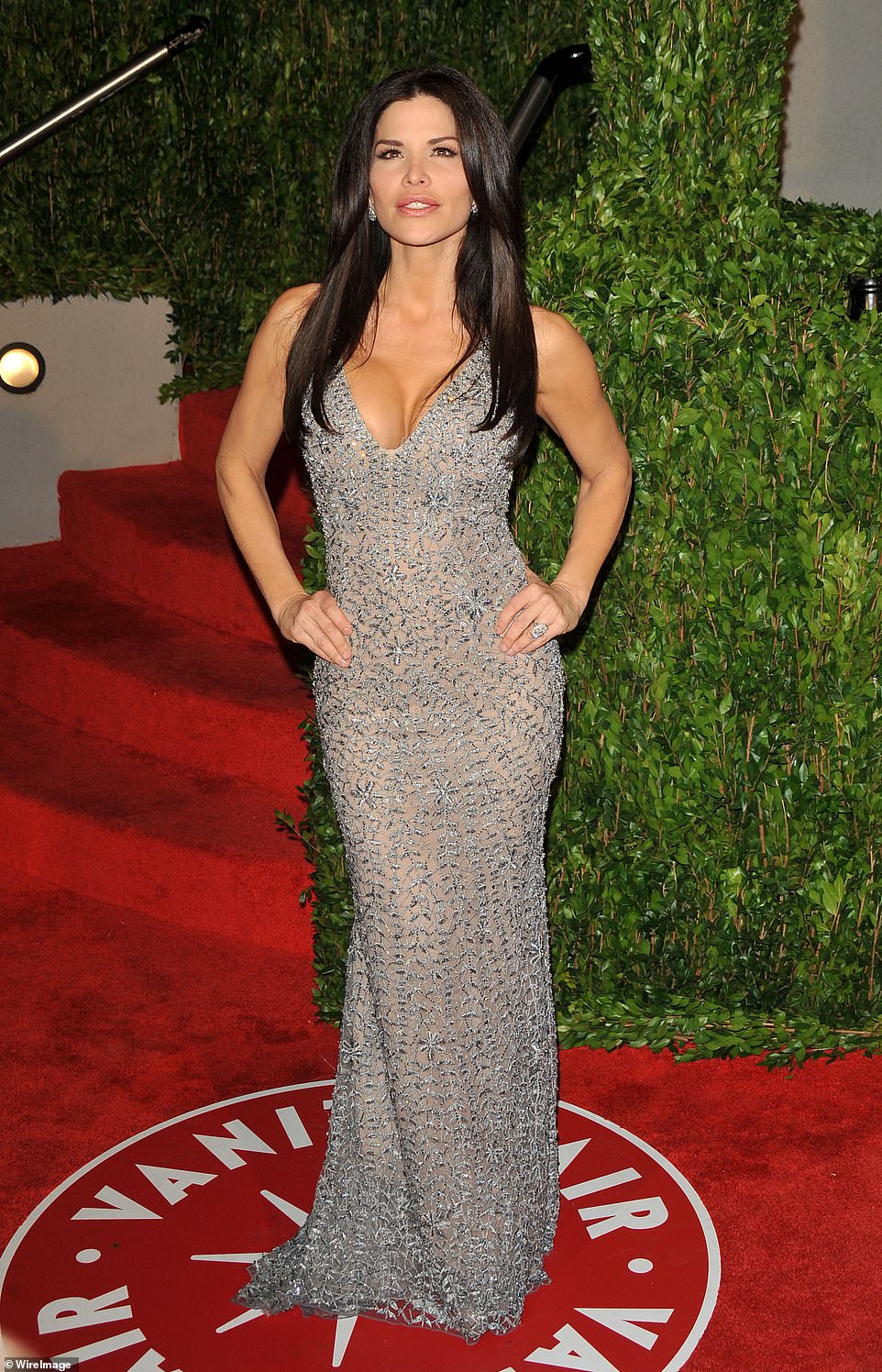 But back on earth, Sanchez is left answering questions about just when her relationship with Bezos began

But back on earth, Sanchez is left answering questions about just when her relationship with Bezos began.

It was previously reported that the pair have been dating since June, months before Sanchez separated from husband Patrick Whitesell in the fall and nine months before Bezos announced he was splitting with Mackenzie.

Bezos, 54, and Sanchez have both denied cheating on their spouses since details of their romance emerged.

A source close to Bezos told DailyMail.com that the Amazon founder only began seeing Sanchez after separating from his wife – however the National Enquirer claims the affair went on behind their spouses’ backs. 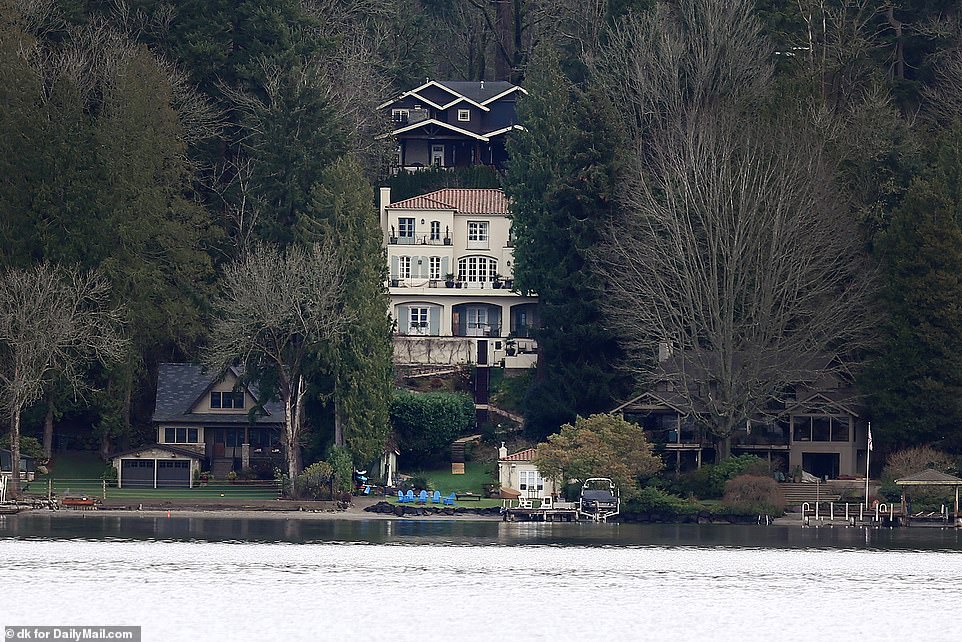 A longtime friend claimed that Sanchez set her sights on Bezos after she and her Hollywood agent husband became friends with the billionaire in Seattle. Pictured is their home in S