Spread the love
thanks for the views we appreciate : 2 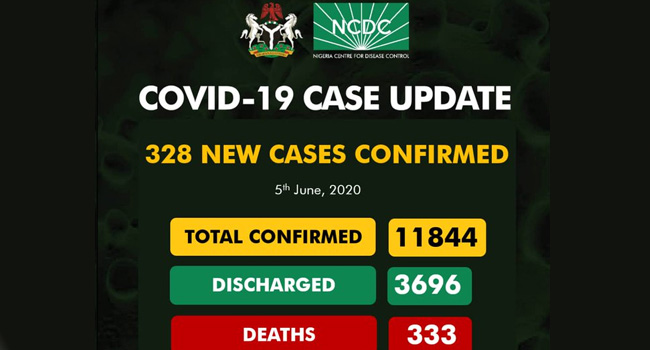 Nigeria has recorded 328 new cases of the COVID-19, bringing the total number of infections in the country to 11, 844.

The Nigeria Center for Disease Control (NCDC), announced this on Friday.

According to the agency’s report, 121 of the new cases were recorded in Lagos, 70 in the FCT, and 25 in Bauchi.

Other affected states were Rivers with 18 cases, Oyo with 16, 15 in Kaduna, 14 in Gombe, 13 in Edo and Ogun, eight in Jigawa, six in Enugu, five in Kano and two each in Ondo and Osun states.

However, the NCDC also noted that a total of 3,696 patients have now recovered from the virus and have subsequently been discharged from isolation centers, while 333 persons have died.

Nearly four months since Nigeria recorded its first case in the country, the figures have continued to rise with Lagos still the epicenter after a record 5,663 cases, closely followed by Kano State with 985 cases and the FCT with 862 cases.

With the latest figures, Nigeria is ranked third on the list of most infected African nations after South Africa and Egypt.

To curb further spread of the virus, the Federal Government had imposed a lockdown on the three majorly affected states at the time (Lagos, Ogun State and the FCT) in March.

Subsequently, other states began to impose varying degrees of curfews and governors eventually agreed on interstate lockdowns as they began to record new infections.

But weeks after the FG-Imposed lockdown, President Muhammadu Buhari announced again that there would be a gradual easing of the lockdown in order to allow economic activities resume as the country could not sustain an extended period of economic inactivity.

While essential workers and other levels of workers have been allowed to resume so far, the government has still appealed to those who can afford to stay at home, to do so.

Reducing interpersonal contacts and maintaining social distancing of up to 2-3meters is said to be one of the ways to curb the spread of the virus but that in itself has proven to be a difficult task for most Nigerians.

Other measures to stay safe include sneezing or coughing into your elbow, washing of hands regularly, use of alcohol-based sanitizers and wearing of face masks.