By Abi John in channels, swordpress on June 6, 2020
Spread the love
thanks for the views we appreciate : 91 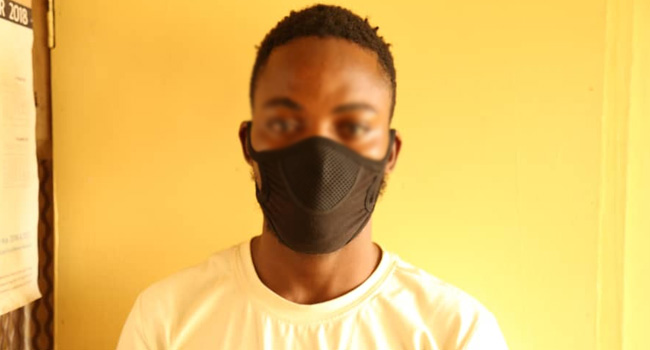 The Police in Lagos State have arrested a man who was seen kissing a minor in a viral video.

The Police Public Relations Officer in the state, DSP Bala Elkana disclosed this in a statement on Friday.

According to Elkana, the attention of the police was drawn to the video showing one Adeyeye Oluwatosin Babatunde, a Botany student of the Lagos State University, kissing his three years old step sister.

He said the incident happened on June 2, 2020, at their residence in Shagamu, Ogun State and after being informed the Lagos State Commissioner of Police, CP Hakeem Odumosu tasked detectives from the Gender Unit to analyse the video and apprehend the suspect.

“The team got the suspect on 5/6/2020 at about 1100 hours. He is handed over to the State Criminal Investigation Department, Yaba for diligent prosecution in court,” the statement read.

The Commissioner, therefore, appreciated those who helped in bringing the incident to their notice.

He also urged everyone to continue to speak out against sexual abuse and gender-based violence in order to bring an end to such.

This comes days after the news of the rape and murder of several girls surfaced, sparking national outrage.

One such cases is the murder of a 100-level student of the Department of Microbiology in the University of Benin (UNIBEN), Vera Uwaila Omozuwa.