By 9jabook in playing on September 21, 2020
Spread the love
thanks for the views we appreciate : 5 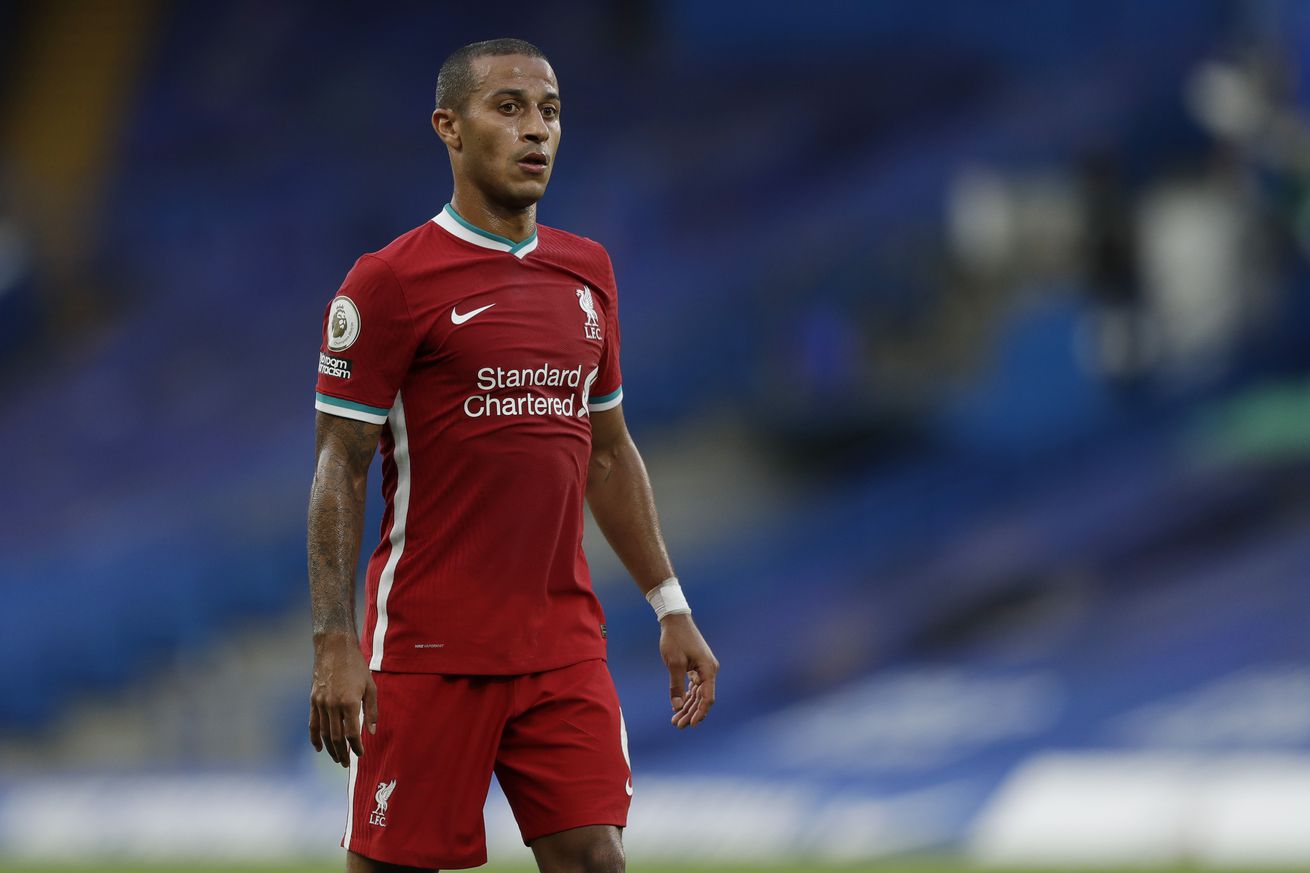 The defending champions beat the Blues comfortably with help from a surprise 45 for new signing Thiago.

Liverpool’s lineup offers both joys and worries. For the former, we have a Premier League start for the dynamic Naby Keita, and a bench appearance for new marquee signing Thiago Alcantara. Yes that’s right, Thiago’s on the bench. No, I didn’t think it would happen either. For the latter, it seems that Gomez and Matip sit this game out, with a knock and muscle issue respectively, per the club’s announcement. So we have Fabinho at centre-back, which is not ideal.

Chelsea meanwhile roll out their newly acquired attacking prowess with Kai Havertz and Timo Werner joining 21-year-old Mason Mount in the frontline. Will we see a Thiago cameo against his former Bundesliga rivals from Bayer Leverkusen and RB Leipzig?

The first half kicks off with a stable press from Liverpool, the squad looking composed in their passing game. The early minutes see both teams bringing industrious activity in midfield, though the ball rarely leaves Chelsea’s half. The tempo of the game is nothing like last week’s fast and furious match against Leeds, with both teams seemingly sizing each other up at a deliberate pace.

A few threats posed by Chelsea come from Timo Werner, who does what Werner does, streaking past defenders with his streaky breakthroughs. It’s good to see Jordan Henderson match-fit again, leading the high press.

Wijnaldum has a chance from the center at 11’, but it lacks force. Firmino is denied a chance he receives from Salah who is out wide, but it is defended away by Christensen. Around 19’, Werner receives a ball and heads towards an open goal, 1v1 against Alisson, but Fabinho catches up and intercepts his pass, kicking the ball long, and dispelling earlier fears about his misplaced role at centre-back.

Liverpool continue their strong play, holding most of the possession and pressing Chelsea well any time they lose the ball while the Blues set up to counter them. A few times the Blues come close, usually through new signing Werner, but Liverpool always manage to get a man in front of the striker, slow him down, and gather enough reinforcements to fend them off

Then, a major moment. Red for Chelsea. A tackle from the rear in the form of bear-hug by Christensen brings Mane down at 43’. It’s red after a VAR check. The resulting free-kick dips just beyond the top left corner of the goal by Trent, with Kepa barely getting his fingers on the ball.

As the half winds down, there feels like there’s only been one side in it for the most part, and that’s the Reds. Yet for all their possession, their pressing, and their solid build-up play, they simply haven’t created the chances to match while Chelsea have set off a few alarm bells on the counter. That red card, though, could make the difference in the second.

The highlight of the second half has been the appearance of Thiago Alcantara, subbed on for Jordan Henderson in midfield. He looks confident and right at home in the Premier League on his debut. He gets involved right away. Soon after, we see a GOAL at 49’- a sublime team sequence involving Salah and Firmino, and headed in by Mane. The Reds are in control and Chelsea registers barely any touches. They are punished at 53’ by a glaring error by Kepa who passes the ball directly to Mane, leading to another GOAL!

We see Milner subbed on for Keita at 63’, possibly to defend the 2-0 lead, and a Minamino cameo for Firmino. Thiago, however assured, concedes a soft penalty at 73’ – by brushing up against Timo Werner in the penalty area – which is saved by Alisson!

While the score-line ends at a modest 2-0, this has been a commanding and assertive performance by the Reds. The midfield composure brought by Thiago has been palpable. Chelsea’s only threat has been posed occasionally by Werner’s pace, but the threat was well handled by Fabinho who looked like a man on a mission. Shouts for Fabinho for Man Of The Match from this writer, despite the Sadio Mane brace. One thing we can all agree on however is that Thiago Alcantara has made his arrival known in the Premier League.