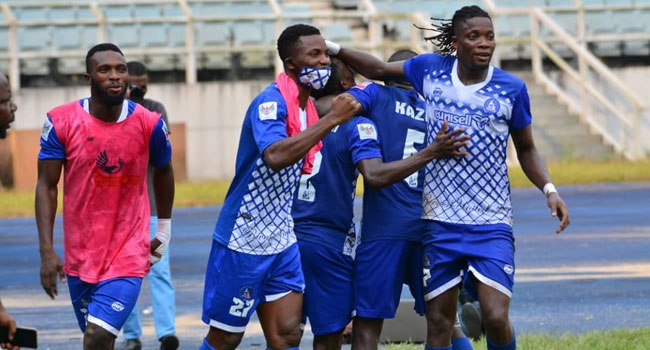 Rivers United have recorded their fourth win of the season with a 3-1 victory over Heartland Football Club at the Adokiye Amesiemeka Stadium on matchday 5.

Losing to Wikki Tourists by a single goal in Bauchi last week Wednesday, the league leaders needed to bounce back, prove their current form is not a fluke and they did just that against Heartland.

From the start of the game, the Pride of Rivers showed their desire for the win. As early as 15 minutes into the game, they were awarded a penalty when Heartland’s Pascal Eze handled the ball in the box. The admirable Godwin Aguda stepped up to the spot and scored.

In the second half, Kazie Enyinanya positioned himself well in the box to double the lead of the home side. Shedrack Oghali pulled one back for Heartland in the 78th minute but Malachi Ohawume’s goal in the 86th minutes destroyed any chance for a comeback, sealed win, and top position on the league table for Rivers United.

In Lagos, MFM Football Club were held to a 1-1 draw by Rangers International of Enugu. The Flying Antelopes took the lead through Ugochukwu Uguoke’s header in the 23rd minute.

The Olukoya Boys who showed good resilience to pick a point at Dakkada last week Wednesday showed good mental strength to get back into the contest when Muyiwa Balogun leveled the scores against Rangers.

The game ended 1-1 and makes it the first time the Lagos based team will be dropping points at home this season. Rangers remain unbeaten in Lagos.

In Lafia, Nasarawa United, the only team still unbeaten this season kept their record intact with a 1-0 win over a stubborn Katsina United. Uzochukwu Chigozie’s goal was good enough to also move the team to second position on the log.

In Aba, Enyimba bounced back from their defeat to Heartland on matchday 4 to beat Kano Pillar 2-1. The People’s Elephant did all the work in the first half with Anayo Iwuala and Gabriel Orok scoring the goals.

Kano Pillars put up a late charge and pulled one back through a beautiful free-kick scored by Fahad Usman. The result ends Pillars unbeaten run while Enyimba secure their third win of the season to move to fifth on the log with a game to play.

In Jos, Plateau United secured their second win of the season with a 3-0 win over struggling Adamawa United that is still winless this season while Lobi Stars beat Dakkada FC 2-1 in Makurdi.

In Nnewi, more pressure was dumped on coach Imama Amapakabo as Abia Warriors made a winning opportunity slip past them. Coach Amapakabo who has been given a 3-match ultimatum by the club’s management after failing to win in four matches needed to prove a point against FC Ifeanyi Ubah that has reach just one win this season.

Christian Samuel’s early goal raised hopes for Abia Warriors but it was also the same player who dashed those hopes when he received a red card after committing a second bookable offence. The hosts made good use of the one-man advantage and levelled up in the 76th minute through Christian Molokwu. It ended 1-1

In Akure, Sunshine Stars produced a late drama again to secure their second win of the season with a 1-0 victory over Warri Wolves. Sadeeq Yusuf scored in the dying minutes of the match to take pressure off coach Gbenga Ogunbote.

A total of 19 goals were scored across different centres. The only fixture that didn’t record a goal was Jigawa Golden Stars vs Kwara United in Kaduna.