Several Bandits Killed, Others Arrested By Troops In Kaduna LGAs

Spread the love
thanks for the views we appreciate : 127 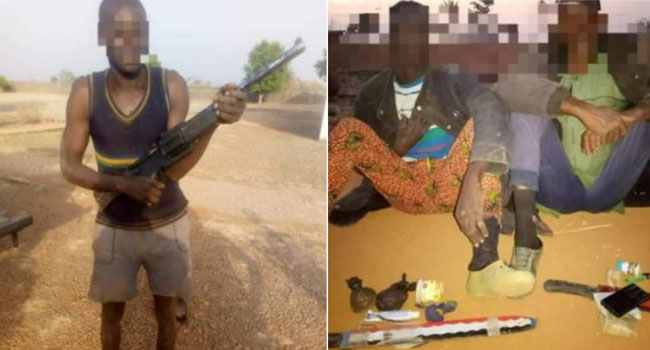 In a continuous onslaught against the enemies of the land, troops of the Nigerian Air force have killed several bandits in Birnin Gwari local government area of Kaduna state.

The bandits were killed during a raid on their camp conducted by the Air platforms over various locations of interest including Rahama, Sabon Birni, Albasu, Walawa, Doka, Kerawa, Rikau, Galadimawa, Kidandan, Kufai, Shantu, Dogon Dawa, and adjoining settlements.

As contained in the operational feedback to the Kaduna State Government, a suspicious abandoned settlement was observed just north of Sofa community, where probing shots were fired and no movements were observed.

Bandits on motorcycles were spotted fleeing into the forest at Sabon Madada, and were duly engaged and neutralized.

Spokesman to the Kaduna State Government, Samuel Aruwan, disclosed that Troops also apprehended two suspected bandits, Ibrahim Muhammad and Muhammad Badamasi, who were part of a gang that shot at some fishermen at the Kungor village river bank, in Damakasuwa District, in Kauru local government area.

In another development, troops arrested one Stephen Yaro in Kigwanu village, Kauru local government area, for possession of a locally made rifle concealed under his motorcycle seat.

Similarly, police personnel arrested two suspected kidnappers, Musa Sabiu and Umar Sule along Ganagira-Soba road in Soba local government area, while the suspects were in possession of a rifle and a machete.