Spread the love
thanks for the views we appreciate : 428
Former Super Eagles forward Victor Okechukwu Agali has backed Napoli striker Victor Osimhen to rediscover his scoring form following his recent injury setback.
Speaking to brila.net exclusively, Agali said Osimhen is just passing through a phase which is normal for every footballer as he also had a similar experience with form and injuries during his playing days.
The former Schalke 04 forward, however, believes that Osimhen will return to his amazing form once the phase is over in the shortest possible time.
“Those are the things that make a top-class player by the end of the day, if you surpassed all those obstacles with injuries and challenges definitely you will stay on top for a long time,” Agali said. 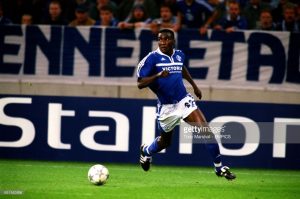 Victor Agali in the colours of Schalke 04 [Image: Getty images]

“We all had it during our own days and we learnt from it, I believe he has these guys close to him who will advise him, his medical team also be there for him – Once he overcomes this phase, he will stay at the top level for a very long time.
Osimhen moved from LOSC Lille in France to Napoli but has struggled to replicate his goalscoring abilities for the Gennaro Gattuso-led side due to lack of form, Illness, and injuries.

He has scored only two goals since moving to Naples.

The post is an advert from www.advertis.uk Victor Agali backs ‘struggling’ Osimhen to regain form after injury appeared first on Latest Sports News In Nigeria.