Spread the love
thanks for the views we appreciate : 559

We are leading with the return of schoolgirls in Zamfara, the arrival of COVID-19 vaccines, and the confirmation of security chiefs.

Zamfara State Governor, Bello Matawalle said the girls were released with the help of repentant bandits without any ransom paid.

The Governor put the number of girls recovered at 279, although the police had earlier said 317 girls were taken.

President Muhammadu Buhari celebrated the release but called for greater vigilance. Later on Tuesday, the President declared a no-fly-zone across Zamfara State and banned all mining activities as part of measures to tackle the North-Western state’s security challenges. 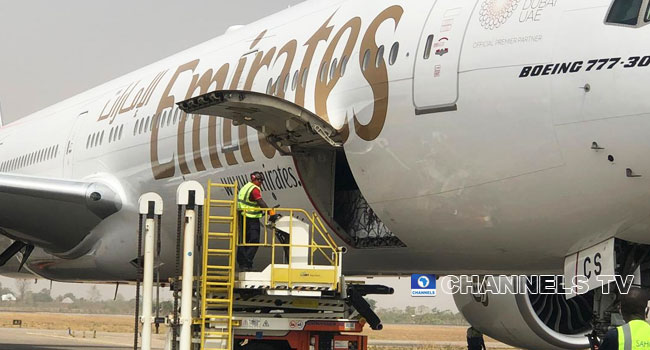 The vaccines, donated by the WHO-backed COVAX, arrived at the Nnamdi Azikiwe International Airport, Abuja, around noon via an Emirates airline (above) and were received by top government officials led by the Secretary to the Government of the Federation, Mr. Boss Mustapha.

Another 41 million vaccines are expected to arrive from the African Union.

Reaction: The President of the Nigerian Medical Association, Prof. Innocent Ujah, and the National Incident Manager of the Presidential Task Force on COVID-19, Dr. Mukhtar Muhammed said the arrival of the vaccine does not mean the pandemic has ended.

The Senate has confirmed the appointment of the newly appointed Service Chiefs.

After the confirmation on Tuesday, Senate President Ahmad Lawan advised the new service chiefs to take the insurgency war to the terrorists and bandits and dislodge them from their enclaves.

In its account of the attack, the army said it was able to repel the terrorists and denied that they were able to attack a United Nations base.

Mass Resignation: The House of Representatives has called for improved welfare for troops and effective delivery of welfare packages across the ranks after a total of 356 soldiers resigned in July 2020.

What else is happening?

Omoyele Sowore: The #RevolutionNow convener appeared in court with a ‘spiritual adviser’.

Herdsmen Crisis: Bauchi State Governor, Bala Mohammed and his Benue State counterpart, Samuel Ortom have settled their differences over comments made on AK-47 amid the security situation in the country.

Abdulrasheed Maina: Money recovered by the ex-Pension boss was used to fund the 2012 budget, a witness told the Federal High Court on Tuesday.

Ebola: Guinea has launched a vaccination campaign after a fresh outbreak of the deadly disease struck the country this month, with officials hoping to eradicate the virus in six weeks.

Alexei Navalny: The United States has imposed sanctions on the director of Russia’s FSB security agency after finding it carried out the near-fatal poisoning of President Vladimir Putin’s leading critic.

And that’s it for today.