Spread the love
thanks for the views we appreciate : 17

Accreditation and voting have started in some polling units in the Rivers Local Government Election where seventeen political parties are contesting for positions.

The All Progressives Congress (APC) which is the 18th political party on the ballot is the only one not recognized.

The Rivers State Independent Electoral Commission (RSIEC) had initially listed 18 political parties for the election but the APC wrote to the commission that it would not be participating in the elections reducing the number of parties to 17.

The party was included when a faction led by Senator Magnus Abe wrote to the state electoral umpire to participate in the election, but when the Supreme Court settled the party’s leadership crisis, recognizing the Chibuike Ameachi faction as the authentic leadership, the party then wrote to RSIEC to withdraw for the election.

Meanwhile, security men have been deployed to strategic locations in the state, to mount roadblocks and enforce the State Government order on the restriction of movement till after the election at 5:00 pm.

Earlier, Police authorities have deployed 17,500 officers to provide security before, during, and after the local government election in Rivers State.

The Police Public Relations Officer in the state, Nnamdi Omoni, explained that the personnel would be supported by operatives to be deployed by other security agencies.

According to him, the Commissioner of Police in Rivers, Eboka Friday, who is also the Chairman of Inter-Agency Consultative Forum on Election Security for the poll, has barred highly placed individuals, including politicians from going to the polling stations with their security aides. 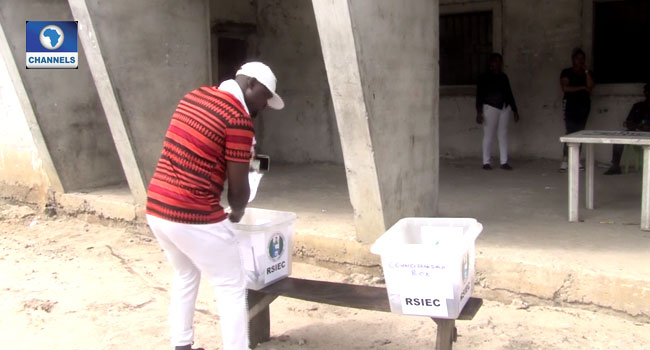 Omoni noted that the police would block all entry and exit points of Rivers and prevent movement of persons on both land and waterways within the state from Friday midnight till after the election.

He appealed to the people of the state to cooperate with the police who have a duty to provide a conducive environment for everyone to exercise their right to vote and be voted for in a free, fair, and transparent manner.

As Rivers State residents go to the 4,442 polling units across the 319 wards in the 23 local government areas to elect their chairmen and councilors for the next three years, the state Governor Nyesom Wike has warned residents against disrupting the election.

In a state-wide broadcast on Thursday, he directed the police authorities to arrest and prosecute anyone caught causing trouble in any part of the state.

The governor said the police and the Rivers State Independent Electoral Commission have been adequately supported by the state government to discharge their duties effectively.

He had also announced the restriction of human and vehicular movement from midnight of Friday till the end of voting at 5 pm on Saturday, except persons and vehicles on essential duties with genuine means of identification.

Governor Wike assured the people that the state government was determined to create an enabling environment for all citizens to exercise their voting right.

He advised the leadership of the 17 political parties that would participate in the election to ensure their members were law-abiding.