WHERE IS BILL GATES’ EX-GIRLFRIEND ANN WINBLAD NOW ? She is Rich Very Smart and Single ?

Spread the love
thanks for the views we appreciate : 16

On Tuesday, May 4, 2021, Microsoft founder Bill Gates and wife Melinda Gates announced their divorce. The couple’s divorce has piqued the interest of many in Bill’s past relationships. Find out where is Bill Gates’ ex-girlfriend Ann Winblad now?

Both Bill and Melinda took to their Twitter to break the news to their followers.

The joint statement read, “After a great deal of thought and a lot of work on our relationship, we have made the decision to end our marriage.” The pair also announced in their joint statement, “We continue to share a belief in
that mission and will continue our work together at the foundation, but we no longer believe we can grow together as a couple in this next phase of our lives.” 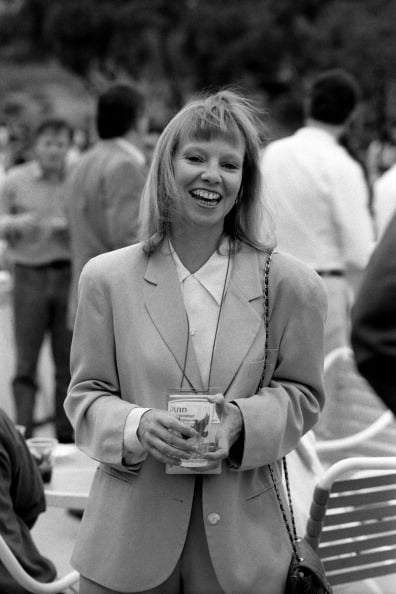 The news of Bill and Melinda’s divorce shocked many social media users. Others are curious about Bill’s past relationship with Ann before his marriage to Melinda.

TRENDING: What is Bill Gates and Melinda Gates’ net worth?

Photo by Ann E. Yow-Dyson/Getty Images
Before Bill and Melinda tied the knot in 1994, the tech giant had dated Ann, who was another prominent personality in the tech world.

Ann is currently a Venture Capitalist, Developer and a Businesswoman.

According to her LinkedIn profile, she is a founding partner at Hummer Winblad Venture Partners (HWVP), which is a venture firm focused on software investing. Ann’s company is also one of the leading investors in enterprise software companies.

Ann who is 70 years old now, is currently also the Director at Optimine Software Inc, located in the Greater Minneapolis area. OptiMine Software is an optimization platform. It helps digital advertisers to increase the display and paid search financial performance.

Aside from her lucrative financial ventures, Ann is also involved in philanthropy like her ex Bill. She is the trustee of Richard M. Schulze Family Foundation.

The foundation, established in 2004, focuses on providing good education to children in local communities. It also provides families with resources to provide good life to their children.

WHEN DID ANN WINBLAD AND BILL GATES START DATING?
Venture Capitalist Ann has been at the helm of many startups in Silicon Valley. The businesswoman has over 40 years of experience in the tech industry.

Many describe her as the first female programmer in the modern tech industry.

After building her first company Open Systems Inc. successfully, Ann became one of the early investors in Microsoft in the 1980s.

However, she hopped on board not just as an investor but also as Bill’s girlfriend. It is unclear how long the two dated. But their friendship and the business partnership continued long after the romance ended.

They broke up in 1987, partly because Winblad, five years older, was more ready for marriage. But they remain close friends. “When I was off on my own thinking about marrying Melinda,” Gates says, “I called Ann and asked for her approval.” She gave it. “I said she’d be a good match for him because she had intellectual stamina.” Even now, Gates has an arrangement with his wife that he and Winblad can keep one vacation tradition alive. Every spring, as they have for more than a decade, Gates spends a long weekend with Winblad at her beach cottage on the Outer Banks of North Carolina, where they ride dune buggies, hang-glide and walk on the beach. “We can play putt-putt while discussing biotechnology,” Gates says. Winblad puts it more grandly. “We share our thoughts about the world and ourselves,” she says. “And we marvel about how, as two young overachievers, we began a great adventure on the fringes of a little-known industry and it landed us at the center of an amazing universe.”

After a recent whirl of travel that included a speech in Las Vegas and a meeting in Switzerland, Gates detoured to a secluded resort in New York’s Adirondacks to spend a weekend with Melinda and Jennifer. There they played with 1,000-piece jigsaw puzzles from a craftsman in Vermont who makes them for customers like Gates. Melinda has helped broaden her husband. Instead of studying biotechnology together, they find time to take singing lessons.

Gates is ambivalent about his celebrity. Although he believes that fame tends to be “very corrupting,” he is comfortable as a public figure and as the personification of the company he built. Like Buffett, he remains unaffected, wandering Manhattan and Seattle without an entourage or driver. Nestled into a banquette one Sunday night at 44, a fashionable Manhattan restaurant, he is talking volubly when another diner approaches. Gates pulls inward, used to people who want his autograph or to share some notion about computers. But the diner doesn’t recognize him and instead asks him to keep his voice down. Gates apologizes sheepishly. He seems pleased to be regarded as a boyish cutup rather than a celebrity.

The phone in Gates’ office almost never rings. Nor do phones seem to ring much anywhere on the suburban Microsoft “campus,” a cluster of 35 low-rise buildings, lawns, white pines and courtyards that resemble those of a state polytechnic college. Gates runs his company mainly through three methods: he bats out a hundred or more E-mail messages a day (and night), often chuckling as he dispatches them; he meets every month or so with a top management group that is still informally known as the boop (Bill and the Office of the President); and most important, taking up 70% of his schedule by his own calculation, he holds two or three small review meetings a day with a procession of teams working on the company’s various products.

There is a relaxed, nonhierarchical atmosphere as the seven young managers of the “WebDVD” group, all in the standard winter uniform of khakis and flannel shirts, gather in a windowless conference room near Gates’ office. They have been working for almost a year on a digital videodisc intended to provide content along with Web browsing for television sets, and he wants to review their progress before leaving for Japan, where he will meet with such potential partners as Toshiba.