“Liverpool Exceptional Against a Team in Form”: Klopp and Robertson React to the Win Against Arsenal 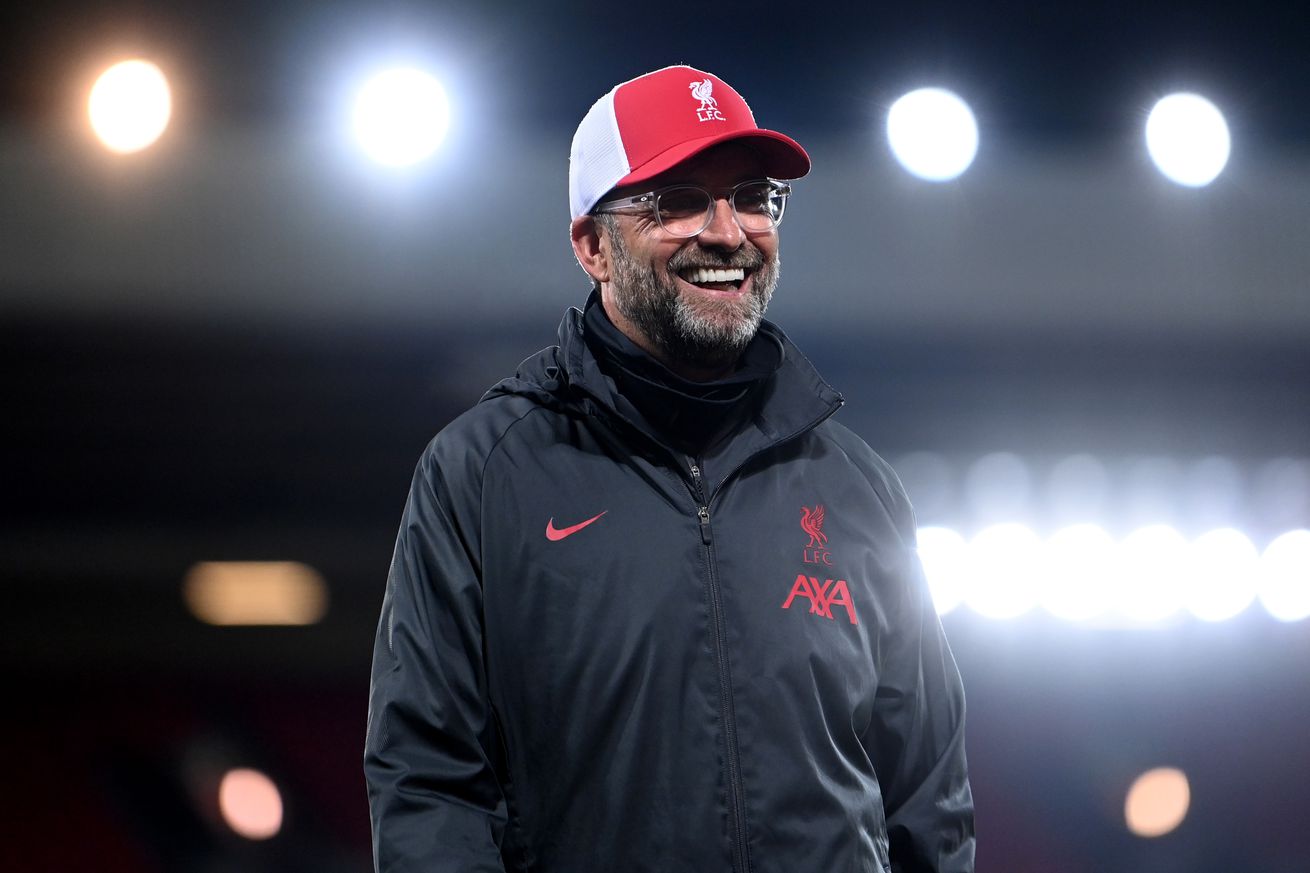 Manager Jürgen Klopp hopped into a post-match interview with Sky Sports, catching Roy Keane’s closing comment that Liverpool had some “sloppy moments.” The Liverpool boss was unhappy with this characterization, and came out strongly against Keane’s notes.

“That’s an incredible description of this game, which was absolutely exceptional, nothing was sloppy [as Liverpool were] absolutely dominant against a team in form, 100% in form.”

Klopp was quick to compliment his team’s composure against the threat of Arsenal counter-attacks, noting that perhaps the game “seemed” more open because “60-70%” of Arsenal’s chances ended up being offside, commenting on the impact the late flags might have on our conception of matches.

Klopp was pleased with “everything” about his team’s performance, however, complimenting a team that held what many believe to be the second-best front line in the Premier League to just five successful passes in the Liverpool penalty area and just four total shots (with three on target, one of which being the Lacazette goal).

Defender Andy Robertson agreed with Klopp’s assessment of his side’s quality, both with the ball and without it.

“It was a fantastic pressing game from us, when we lost it I think every single one of us reacted in a positive way and we managed to put them under a lot of pressure which forced them into mistakes. With the ball we showed our qualities as well.”

Robertson also spoke of the perhaps only “sloppy moment” with a smile on his face now that the three points are safely in his possession.

“I don’t think we can have too much to complain about, apart from probably my assist at the wrong end. But the reaction after that was fantastic, we went behind against a really good team, and the response was really positive.”

Robertson came back from his error in a very big way, scoring Liverpool’s second and contributing to the strongly positive performance overall.

Read more • Comments Off on “Liverpool Exceptional Against a Team in Form”: Klopp and Robertson React to the Win Against Arsenal

Liverpool 3, Arsenal 1: Man of the Match 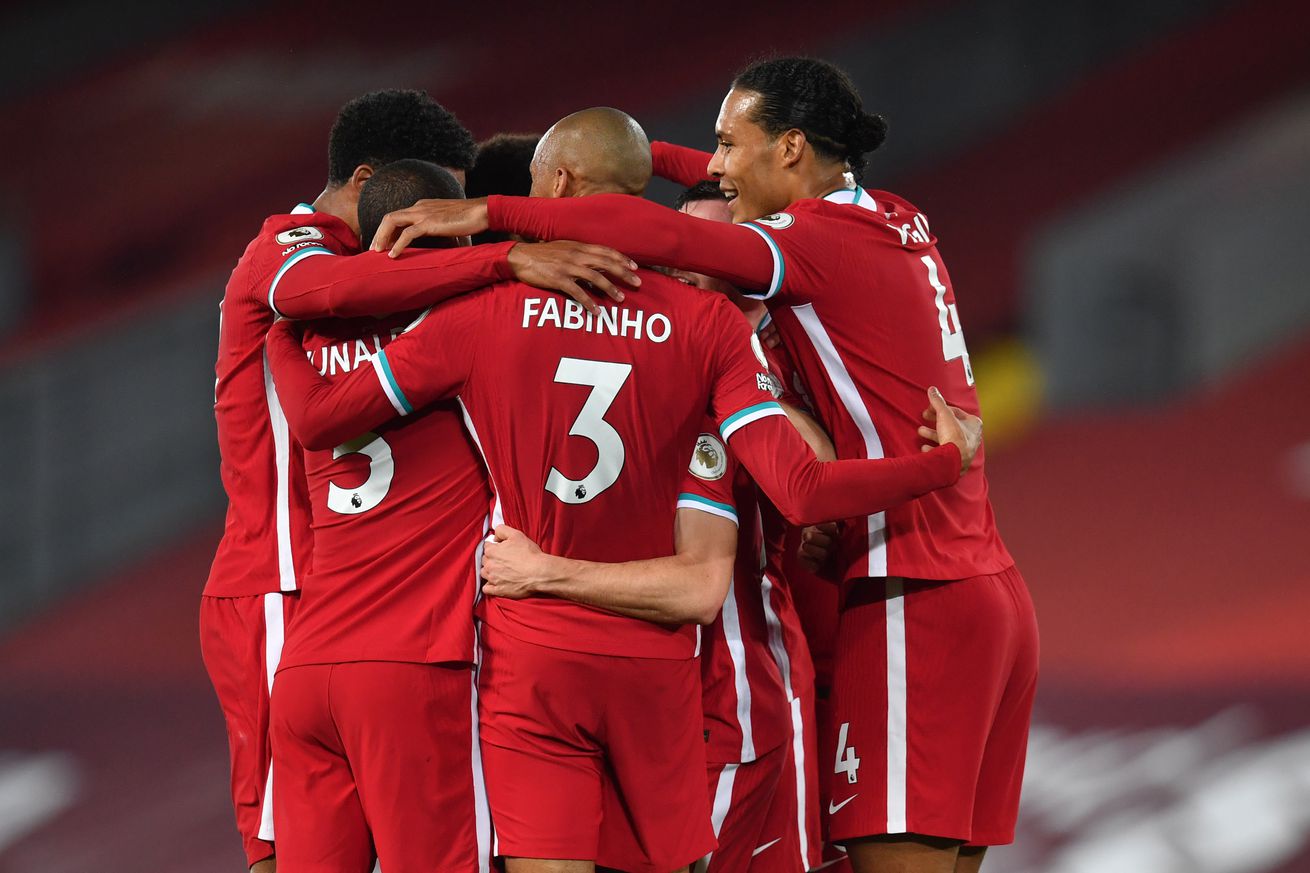 After the Reds collect their customary three points from an Arsenal visit, we want you to rate your man of the match.

Despite going down a goal against the run of play through an Andrew Robertson mistake, Liverpool do the thing we expect them to do now, and battled back, wrapping up a relatively comfortable 3-1 victory in the end, with goals from Robbo, Sadio Mané, and debutant Diogo Jota.

Now tell us how you saw it! With our favoured polling tool out of service, we’re instead giving you a choice between a few of the players we thought looked best today for the Reds, so make your choice below and vote for who you think should be the man of the match—or take to the comments to let us know that we got it wrong by leaving the real man of the match off the list entirely.

As always, anyone visiting on Apple News or Google AMP who wish to vote and can’t see the poll can make it visible by navigating to the front page of The Liverpool Offside and re-entering the story.

Read more • Comments Off on Liverpool 3, Arsenal 1: Man of the Match 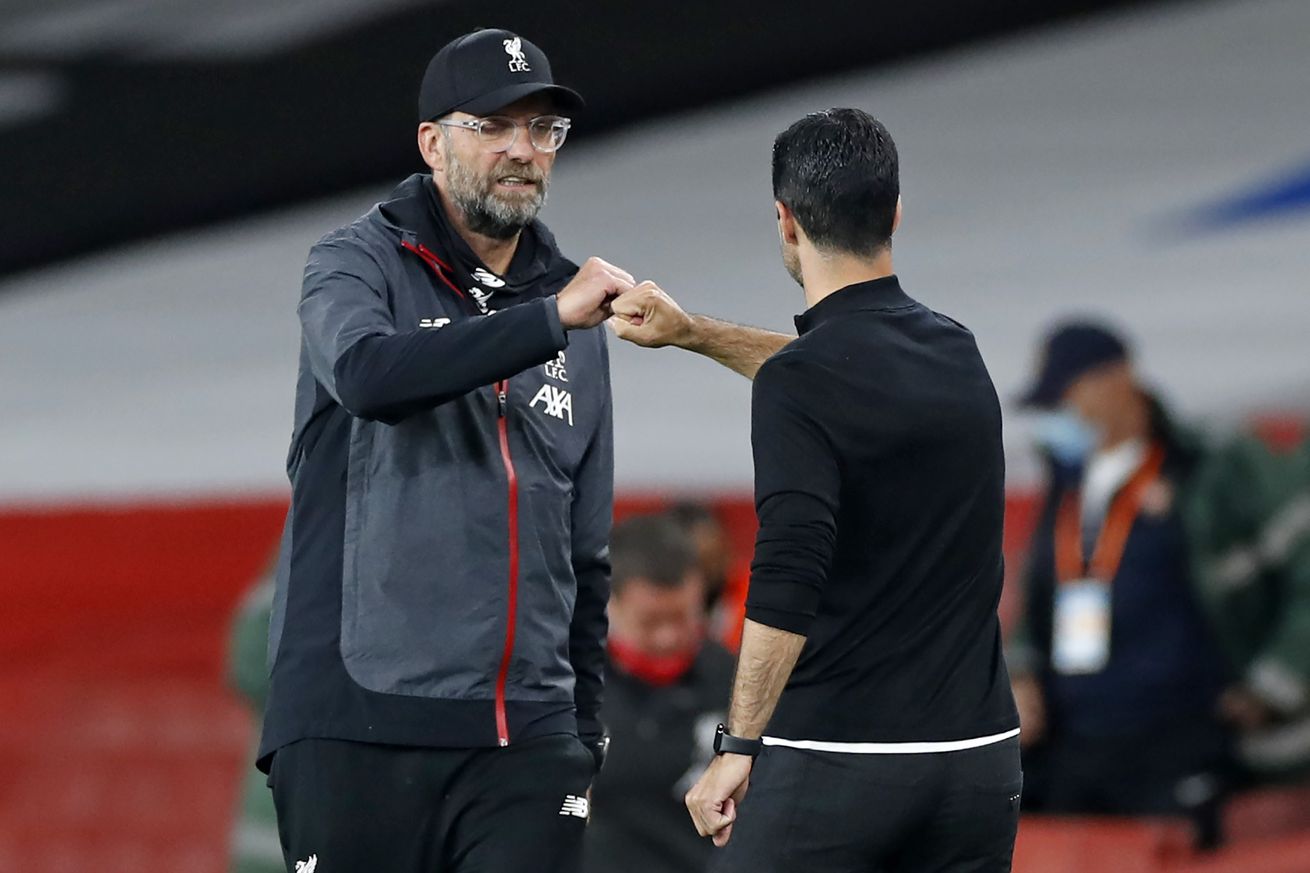 Liverpool welcome Arsenal to Anfield looking for a little payback after the Gunners took the Community Shield from the defending league champions to kick off their 2020-21 campaign. Stick with The Liverpool Offside for full coverage of Monday’s match.

Read more • Comments Off on Premier League 2020-21: Liverpool vs. Arsenal

Liverpool 3, Arsenal 1 – Match Recap: Come From Behind Win for the Reds 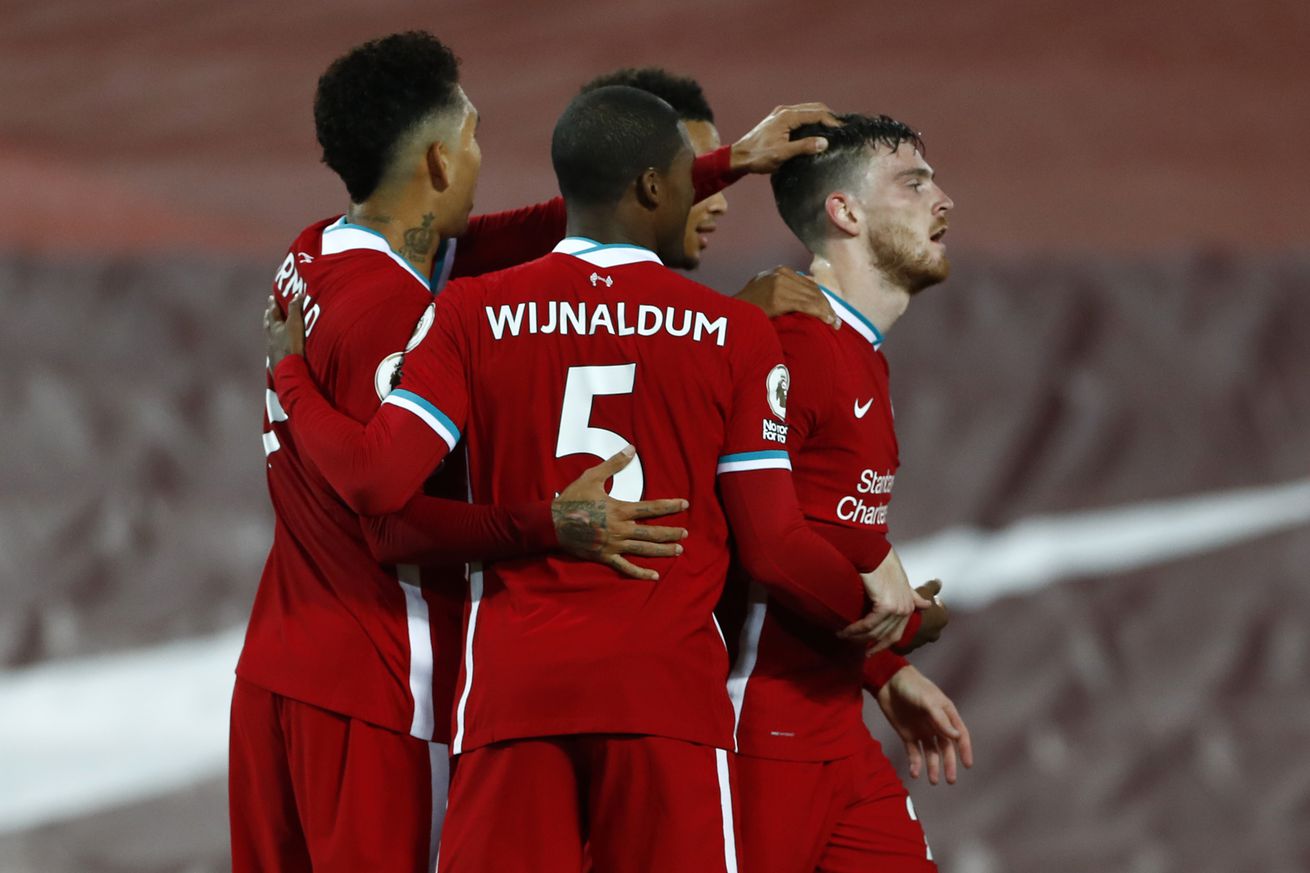 The scoreline flatters the visitors, but the Reds get a well deserved win to keep their perfect start intact.

Leicester City, with their frankly ridiculous +8 goal differential and 12 goals, is probably a bridge too far for these Reds to catch tonight. But Liverpool can realistically move into second place, and crucially gain 6 early points on Manchester City with a win tonight. Bonus: they get to move above the Ev. However, they have to overcome an Arsenal side that doesn’t look nearly as likely to fall to bits as recent iterations.

New signing Thiago is out, but Alisson passed the fitness test, as did Joe Gomez. Fabinho returns to midfield, and the rest of the XI is about as strong as you’d expect. It should be a cracking early-season match between the Reds and Gunners at Anfield.

Sadio Mané has come out hot, and is rightly booked after his second questionable foul in the opening three minutes. Loving the aggression, Sadio, but you’ll have to smarter than that if you want to stay on the pitch.

Other than Mané’s rash challenge(s), Liverpool have been moving the ball around with ease. Virgil Van Dijk has completed a few long balls over the top, which appears to be a weakness they’re trying to exploit.

Big chance! Some excellent work around the box produces a fantastic cross from Trent Alexander-Arnold. He picks out Mané who, unfortunately, fires his first time shot directly at the keeper.

OFF THE BAR! Liverpool go tantalizingly close to an opener! TAA connects on a shot from outside the box, it takes a deflection and hits the underside of the bar, before being cleared. Unlucky!

Arsenal cannot live with Liverpool’s press at the back, and cannot press with any effectiveness from the front. That said, Liverpool need to start putting these chances away.

Goal. Fuck. If you look up “against the run of play” you’ll see that goal. Arsenal do well to beat the press for just about the first time of the match. The ball falls to Andy Robertson in the box for wh at should have been a routine clearance. But instead he fluffs it, and it falls to Lacazette right in front of goal. Oof.

GOAL! Hell of a response. Naby Keita is rugby tackled to the ground, but the ref plays advantage. Roberto Firmino picks up the pieces and plays Mohamed Salah through. Mo wiggles past a defender into space in the box, before firing off a low shot, The shot is saved, but falls to Mané at the back stick, who slots it.

GOAL!! Robertson makes up for his error with a rare goal! Alexander-Arnold puts in a dangerous cross, and Robbo chests it down and finishes with his favored left boot.

Even after being gifted a goal, the looks on Arsenal’s players say it all: they are being bullied all over the pitch, and they know they are lucky to still be in this. That said, perhaps Kloppo should consider subbing Mané sooner rather than later, as he looks ripe for a second yellow.

The Gunners come out swinging in the second half, but given the space they’re leaving at the back, they might regret it. Either way, there appears to be more goals in this.

Alisson appears to be back to his best, doing fantastically well to deny Lacazette an equalizer after the Arsenal forward was played through on goal. This was moments after he saved a similar, albeit offside, effort. Liverpool are still on top, but this Arsenal side can definitely hurt us if the game isn’t put to bed.

As the half enters the last 15 minutes, it’s becoming a war of attrition. Both sides look punched out, the only question is whether Liverpool can hang on for the win, or Arsenal can sneak a late equalizer.

Klopp makes his first changes of the match, a double substitution: Mané and Keita off for Diogo Jota and James Milner. Jota is immediately at it, offering Liverpool an attacking thrust that has been sorely missed as the second half drags on.

Jota should have opened his Liverpool account right there! Salah picks him out with a brilliant through ball, but Jota can only find the side netting with his shot. Jota should have had another big chance a moment later, but Salah came up with a fantastic last-ditch tackle. Same side, mate! Same side!

GOAL!!! JOTA GETS HIS GOAL! David Luiz clears an Alexander-Arnold, but only as far as Jota at the edge of the area. Jota chests it down, and volleys it into the bottom corner, with a kiss off the inside post.

That was nervier than it needed to be, but it was a deserved result from a dominant performance from the Reds. And Arsenal’s tradition of conceding at least three at Anfield…continues.

Read more • Comments Off on Liverpool 3, Arsenal 1 – Match Recap: Come From Behind Win for the Reds 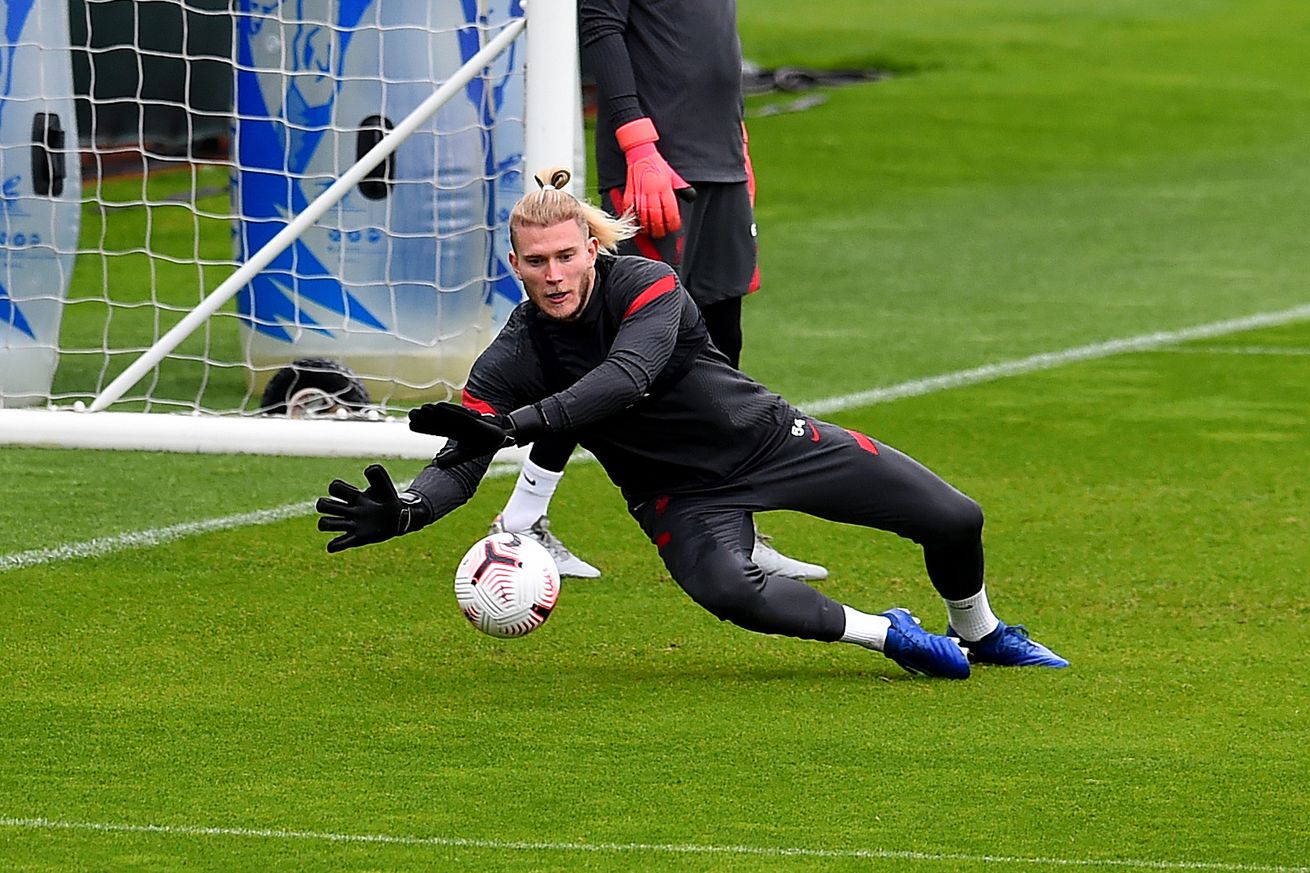 The 27-year-old German will try to get his career back on track in the Bundesliga.

In an ideal world, Loris Karius’ loan spell at Besiktas would have gone better, the Turkish club wouldn’t have failed to pay his wages on multiple occasions, and his two-year loan would have turned into a permanent stay.

The world, though, is far from ideal, and so Karius returned to Liverpool earlier in the year after terminating his Besiktas loan and the club began to look for a new home for the shot stopper—with a preference for it to be a permanent one.

That, too, didn’t come to pass in the end, and instead today there is confirmation of another loan for Karius, this time with Union Berlin as he returns to the Bundesliga in an effort to get his faltering career back on track.

Karius got his start as a professional with Mainz 05 in Germany after spending time in the Manchester City academy before Liverpool triggered his release clause to sign him in 2016. In 2018, he extended his Liverpool contract through 2023.

That means that should he prove his worth with a Berlin side that finished solidly mid-table last season, he will still have value next summer and the hope at that point will be that a new permanent home can be found for him.